Today started in a most unusual way with a meeting called by the Organising Committee with representatives of the competitors [Ed. participant surely?] to discuss a possible change to the published itinerary due to the warm temperatures and the vent plus fort. The outcome was a general agreement that in view of the challenging conditions, and the lack of sleep last night thanks to an over-anxious dog) today’s stage would finish at St Michel L’Herm in the marais (marshes).

Howard, the competitors’ representative [participant surely? Ed.] said after the meeting that;

“This was a real step forward in improving the working conditions of the cyclists and probably the first time a major Tour has been modified since the 2015 Giro, when 20 competitors got lost in the snow!”

Being Ascension Day, it is a public holiday in France and many families ‘bridge the gap’ to the weekend by taking the Friday off too; making it a long weekend. The festive feel was further enhanced by the shops opening later. This gave us the opportunity to bake our ‘emergency’ baguettes in the oven. They only took 15 minutes and were just like the real thing and meant we could make an early start while it was still coolish. 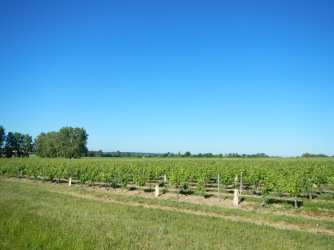 Some of the best bits of the route were riding out of Talmont with a quick view of the old chateau and then the first vineyard of the ride. Though the coast was never far away it was always just out of sight. Much of the route went around the back of the seaside towns and was full of families cycling from campsites to the beach. This caused the first instance I have experienced in 12 or so days of motorists rudeness to cyclists. I have written previously how great it is to ride in France and the courtesy cyclists are shown, however today I stayed on the road rather than use the neighbouring shared foot/cycle path because there was a large family group navigating small children along it. This meant that a car behind me had to wait until an oncoming car passed before it could overtake me. As it did so the elderly matron in the passenger seat shouted out of the window; ‘la piste! la piste! And pointed angrily at the crowded path. You will be pleased to know that in reply I gave her a cheery wave and a ‘bon jour!’ Though I don’t think it helped her mood.

I suppose that the provision of such good cycling infrastructure creates the impression in some small-minded people that cyclists should not be on the road. It is something we must watch out for as we push for better facilities for cycling at home.

It’s very flat around here, nearly all of it is reclaimed land and there are few trees or hedges – just big fields of maize, sunflowers and wheat. My direction was southerly for all but the last couple of kilometres so the strong southerly wind was blowing in my face the whole time. It was like constantly cycling up hill. I hope all the riders speeding past me the other way realised how lucky they were.

The marshes around here are pretty dried out and used for arable farming unlike the wetter marshes which were the domain of cows and sheep. Just before the end of the ride I came across a hamlet on an outcrop of limestone. It was once an island like the others further off shore. As I rode past the wave-smoothed rocks were easy to spot. That’s how interesting today’s section has been! 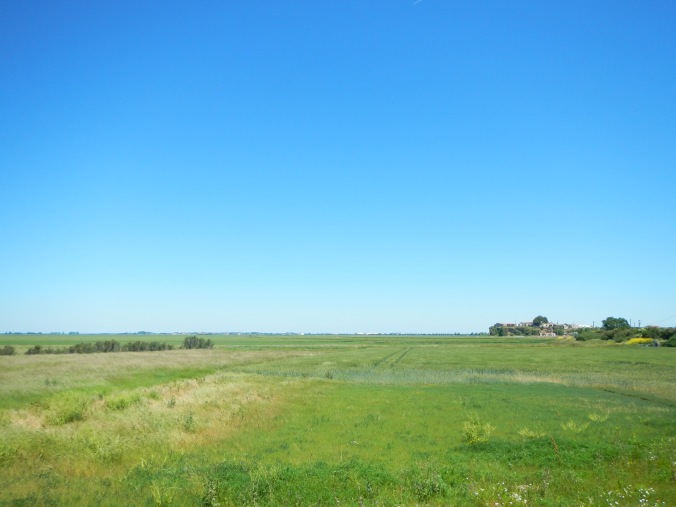