Oh! I have found a market!

I now feel fairly well qualified to discuss the pros and cons of the campsites we have visited. (13 including today.)

We decided not to try and pre book any sites as we didn’t know how the adventure was going to shape up and out of season didn’t think it would be a problem. This has certainly been the right decision.

As we have already described in our evening planning meetings we go through a range of options.

Howard looks at the Velodyssee website for his route and campsites nearby. Meanwhile I go through the ACSI guide to find any other possible places.

The ACSI guide has proved invaluable, as it is a comprehensive book and discount card for all sites out of season. We also have all the ACSI sites linked to our Sat Nav so this makes it easier when programming the Sat Nav.

The sites are supposed to charge a set price between 11 and 19 euros to include electricity and one dog. (I still think it’s a complete rip off to charge for a dog on a campsite when he hardly has to use any of their facilities!)

As well as these two main planning aids we also have all the Aires guide, an app called Park4Night, Camperstop Europe and as a last resort Google.

So the priorities usually go:

After the morning departure routine I drive on to the next meeting place and have now discovered that this has to be before 12 as out of season all the reception desks are closed for at least 2 hours. Some even 3!

My French is practically non existent but I seem to have just enough for the reception lady (It’s always been a female) to understand what I am trying to book. I am now quite used to the fact that they are a little surprised that I am on my own, driving, and can’t open barriers ‘cos they are on the wrong side.

I haven’t actually seen any other females driving a motorhome in the whole time we’ve been away! (I have also seen hundreds of motorhomes.)

Incidentally one lady actually asked if my husband was asleep in the van?

After navigating the reception, and generally being told to choose any pitch, as most places are empty, Alf and I then negotiate the reversing. (Very pleased that we decided to get a reversing camera fitted.)

Alf prefers to be out of the van rather than in it, so he’s more than happy to be tied up outside to any handy tree or post. He’s quite choosy about the ground so will scrape out his own nest in the shade if the chosen spot isn’t quite to his liking. 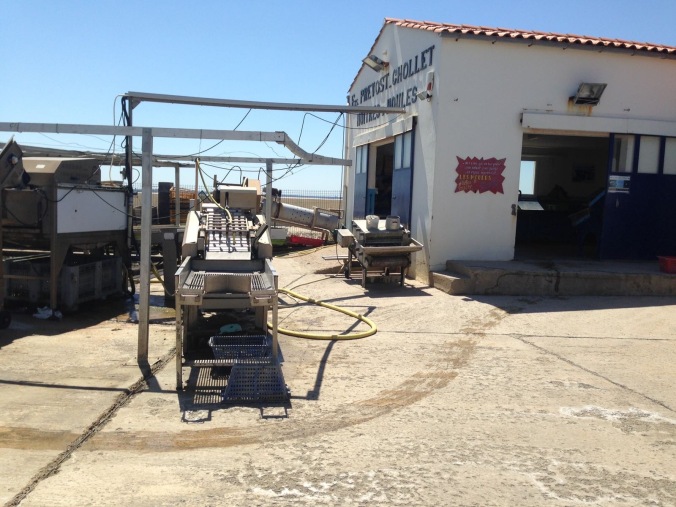 A Mussel and Oyster Processing Factory

After the usual set up routine we normally go on a site recce, catch up on domestic stuff, entertain ourselves with a swim, cycle or walk and have some lunch before Howard arrives sometime later.

It has been really different seeing France for the first time out of season. Most campsites appear deserted. Very few have any bar/restaurant that is open. On-site shops don’t exist, although at some you can order morning bread.

They are really quiet without children!

I hope this isn’t too mundane, but I’ve had several requests to keep giving the other side so I’ve tried to fill you in with a few details?