At the moment the rain outside is of biblical proportions; birds are being knocked out of the sky by the ball bearing-like raindrops. But the rain is only the second story of the day compared to the organising committee’s extraordinary decision to apply the Duckworth/Lewis method to the competition (surely, leisurely cycle ride? Ed.). This is the first time in international cycling history that cricket’s method for adjusting scores in rain-affected games has been used to ensure that a result is possible tomorrow.

Last night it was agreed that today’s session would be a long one to St Jean de Luz, to ensure a short run in on the final day to coincide with the TV news feeds around southern Europe. An early start was arranged and, for the first time since Christmas, alarms were set to ensure we were on the road by 0900. In the end it was an even earlier waking caused by the batteries in the smoke/CO alarm running down and the subsequent beeping sending Alf into paroxysms of panting in my ear. This wasn’t helped by Wendy seeing the amusing side of this and focussing on laughing rather than being of any practical help.

Our campsite was really well placed for good, long dog walks through the forest to the dunes and beaches so Alf and I took full advantage of this; while Wendy recovered her composure and baked the emergency bread (it seems you cant get bread before 0900 anywhere in the low season?). As we left the dunes it began to get really dark and by the time we were back at the van it was raining, by the time I shut the door it was coming down like stair rods (for our younger readers, stair rods were metal rods that held the stair carpet in place before grippers were invented.).

The local forecast predicted that the rain was likely to be in until lunchtime and to underline that it began to thunder too (“Alf! Lie down!”). I took a photo of the water flowing down the windscreen but it doesn’t do it justice as you cannot see the Ark the people on the next plot were building. 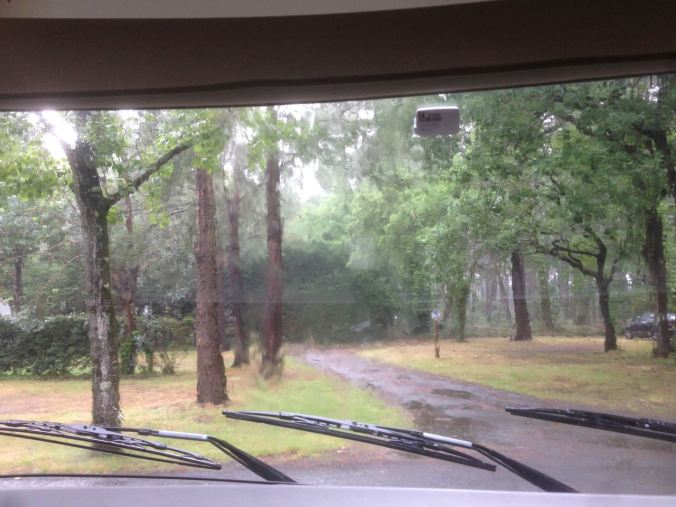 The Ark is just to the left of the shot, behind the black car.

The postponement flag was raised, tea was drunk and books were read. Still it rained and there seemed to be no let up.

The organising committee and the competitors’ reps met to discuss the options. Both sides were keen for there to be a finish tomorrow (Sunday) and so the radical idea of applying Duckworth/Lewis was proposed. There seemed to be a weather window due from midday to about 1500 so today’s distance was shortened to take account of the time already lost to the bad weather. Midday was also a cut off because Wendy and the van would not be able to leave over lunchtime and we would have to pay for a second night.

Just after 1100 the rain stopped. The AP (postponement) flag was lowered and the teams burst into action. Everyone was off the shore by 1145.

Today’s route was as good as yesterday’s clearly signposted and well-surfaced and I made the most of enjoying cycling through the woods before the urban landscape of tomorrow’s leg. As I approached Hossegor the sky began to darken again and the rain resumed with a vengeance. By the time I had stopped to put my waterproof on it was too late – I was soaked; so I didn’t bother. I reckoned at least it would stop my glasses misting up. I don’t know if it was the rain but Hossegor and its partner Soort were not much to look at. My abiding memory is of great concrete blocks of eighties apartments.

I am sure the turn around Capbreton’s marinas would have looked much better with a bit of sunshine, but I was having to focus on some cats’ cradle of a route through the town with rain spattered spectacles and Semper D having a ‘routing error’ problem. Thank goodness the Landes authorities have put up such good signage, it meant I didn’t take a wrong turn all day.

Out of Capbreton and it was back on to another old railway track all the way to the turn for tonight’s campsite. I bet in dry weather the route is very pretty as it goes alongside a river.

I had made such good time that I arrived just as Wendy was checking in as she had to wait 30 minutes for the reception to open after lunch.

It is a shame that the penultimate day has been so wet (its been as wet as Wet Wednesday, see Day 5) but we have had only two wet days in the four weeks we have been away. Today’s modest 34km has at least taken me over 1000km for the trip.

I have had a shower, mug of tea (x2) and most of a ginger cake and I am feeling fine. Outside however, it is still teeming down. 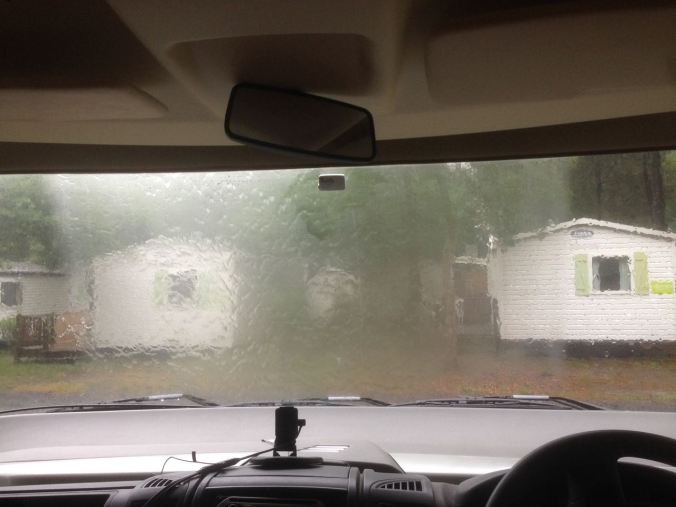 The camper is level, it is just the quantity of rain.

We are about to draw lots to see who is going to take Alf out this evening. Tomorrow we are off to Spain!