I am writing this at four in the morning, unable to sleep; just when I thought I had got to grips with jet lag!

Yesterday we crossed the Equator and into the Southern Hemisphere; six hours later we landed in Sydney. We are now ensconced in our hotel on the border between the City Centre and Chinatown. Which reminds me, three days ago we were in Chinatown in Singapore. I have a bit of catching up to do with this blog, so here goes…

You will have remembered that I was a little bit excited about going to the Zoo today. I haven’t been to one for a long time and I had heard a lot about how good Singapore Zoo is. Its proud boast is that it is one of the top five zoos in the world according to Tripadvisor.

An early pickup outside our hotel whisked us off to the zoo about 25km away, almost on the north coast of the island. We were having the ‘jungle breakfast’ option. This meant that we were having breakfast in the zoo’s restaurant and were joined by some of the zoo’s free roaming orang-utans and their keepers. As we ate, a tree trunk was lowered towards the apes’ enclosure. This was clearly a well-rehearsed sign as three adults and two younger orang-utans swung out of the trees above us and climbed down the trunk into the restaurant. While they munched on sugar cane, we were then given the chance to come up and take photos while the curator talked to us about the animals, their lives in the zoo and the problems that orang-utans are facing in the wild.

Wendy and I then wandered around the zoo. Being in a tropical rainforest gives any zoo a head start over the competition, and Singapore Zoo certainly looks beautiful and has the bonus of wild (as in local not livid), free roaming animals from monkeys to big lizards roaming around as well as the captive specimens. We didn’t have long left to see the rest of the zoo’s delights so we chose to miss out the Australian section (we are going to Australia Zoo next month) and some of the smaller animals and just managed to get back to the coach before it pulled away – the tour operator wasn’t joking when they said they wouldn’t wait! 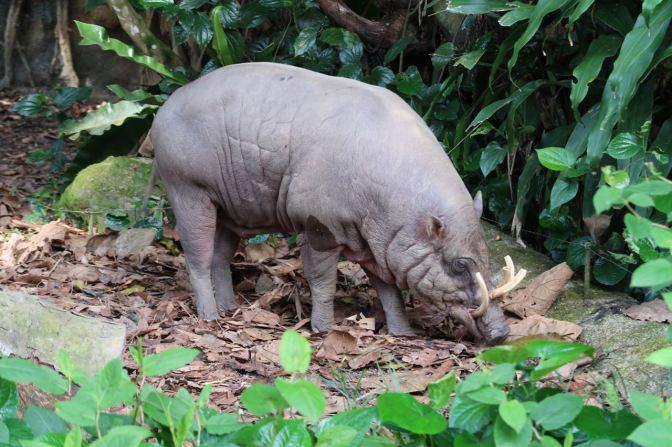 Going to the zoo reminds me that when I was very young, we had a goldfish. It lived in a bowl on top of the piano. One day the goldfish and bowl had gone. Mum told me that Dad had given the goldfish to the zoo, where it would be happier swimming with lots of other fish. A year or so later I went with my class on a school trip to the zoo. At the aquarium section I pointed to one of the fish and proudly told my teacher;

The local children here must be very generous, because they have donated hundreds of their fish to the Singapore Zoo! They are swimming in the moats that surround the enclosures and sometimes are more impressive than the animals they are guarding.

We asked the coach driver to drop us off near Chinatown on the way back. By walking a couple of blocks and crossing a couple of roads we found ourselves in another world. So far, Singapore had surprised us by being very British in many ways. English is used widely, including for the main signage, cars drive on the left (and their number plates have a 60s look) and the general feel of the architecture and planning would not be out of place in London, Birmingham or Manchester. Now we were suddenly plunged into the Far East.

Singapore began as a trading colony because of its location between India and China, a half-way point where merchants from East and West could meet to trade goods. As a result there has always been a strong Chinese community on the island. This has in turn led to a vibrant Chinatown area.

The Chinese New Year decorations were still in place

This was an area of temples, street food, small shops with their goods spilling out on to the street, tailors, jewellers, Chinese medicines, lucky charms, ‘phones and cameras. A couple of times we were charmingly enticed into having a closer look inside at the silk shirts or jewellery that ‘was just right for us’. One tailor showed me a faded postcard from Robin Cook, the late politician, thanking him for his suit and he (the tailor not Robin) couldn’t understand that I had no need of a suit anymore. 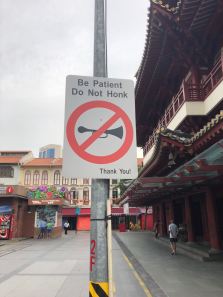 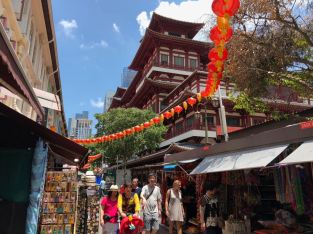 That evening, after a swim in the pool, we crossed the river to a group of restored go-downs (the old dockside warehouses) which is now full of bars and restaurants for dinner.

By the way, appropriately, our visit to the zoo saw the first outing of my ‘jungle hat’.

We rose later than usual (I thought this was a sign that I has cracked this jet lag malarkey) and strolled down the river to the Gardens by the Bay to visit the Domes. These are two enormous green houses, larger than the Eden Project in Cornwall. We didn’t have enough time to visit both of them so opted to see the rainforest dome. It was spectacular. As we entered a 35 metre high waterfall greeted us, cascading over lushly planted rocks. The dome is designed to display and explain the unique ecosystems found in the worlds temperate rainforests so we took the lift to the top of the dome and then walked down a gently spiralling path, through the ‘canopy’ back down to ground level. 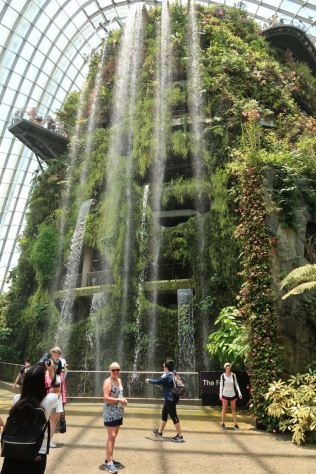 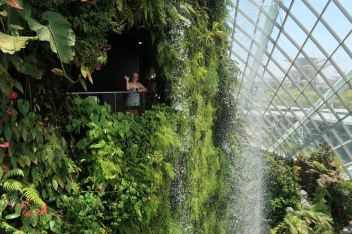 There was so much to see that it took longer than we expected and now time was against us. We had to be out of our room by 1600 so we just had time for a swim before we put our cases into storage and took the water taxi back to the bay for a last look and a drink. As we sat in the taxi, making stuttering progress through the Friday evening rush hour traffic, on our way to the airport we were sorry to be leaving Singapore but excited because next stop is Sydney!

Now it is time for some breakfast, we have got a whole new city to explore and we have some chums to meet.