This morning we said our tearful goodbyes to Bethan and Huw the Hero, well we were sobbing, they seemed quite buoyant? By the way since I last wrote, we went on another great walk in the Alpilles, found some telephone masts disguised as trees, taken some more photos of Le Baux-de-Provence and had another memorable meal together.

Today Wendy and I were heading West North West towards Lacanau, where we have to be by Saturday to meet Hannah and Jamie. (It is especially important that we make it on time, as they are flying out with only hand luggage and we have all their camping kit!) It has been a chance for me to put in place a new planning technique that I might copyright. Gone are the artificial ways of Google Maps and Satnavs, instead I have returned to basic navigation, like our forefathers would have used. I turned to the ‘Tableau d’assemblage’page at the front of our Michelin atlas, put a finger on Arles and another on Lacanau and drew a line between them [see photo below] then a drew a cross about a third of the way along at the previously unheard of town of Millau. Millau became tonight’s destination.

What could be easier?

The plan was to avoid the motorways too and travel only on the N roads (like A roads in the UK) as after our mad dash across Italy we wanted to see a bit more of the country. However thanks to range after range of hills and assorted rivers this would have meant the journey taking a ridiculously long time. Instead we compromised and took the free A750 and A75 motorways that wove through a striking limestone landscape of gorges, hills and plateaux, finally descending a couple of hundred metres into Millau. On the way down we stopped to take in the breath-taking Millau Viaduct. This motorway bridge stretches across the Tarn Gorge and has become better known than the town from which it takes its name.

The view from our campsite

Camping Huttopia Millau was first right after the McDonalds, right over the bridge, on the confluence of the Tarn and Dourbie rivers. It was a very picturesque spot, but not without its risks. The girl who booked us in made a point of drawing our attention to the flood evacuation policy! They have clearly had a bit of rain recently as the ground is soft, so soft in fact that it meant we had to use our tracks to stop us sinking in. It was the first time we have had to use them since April last year. 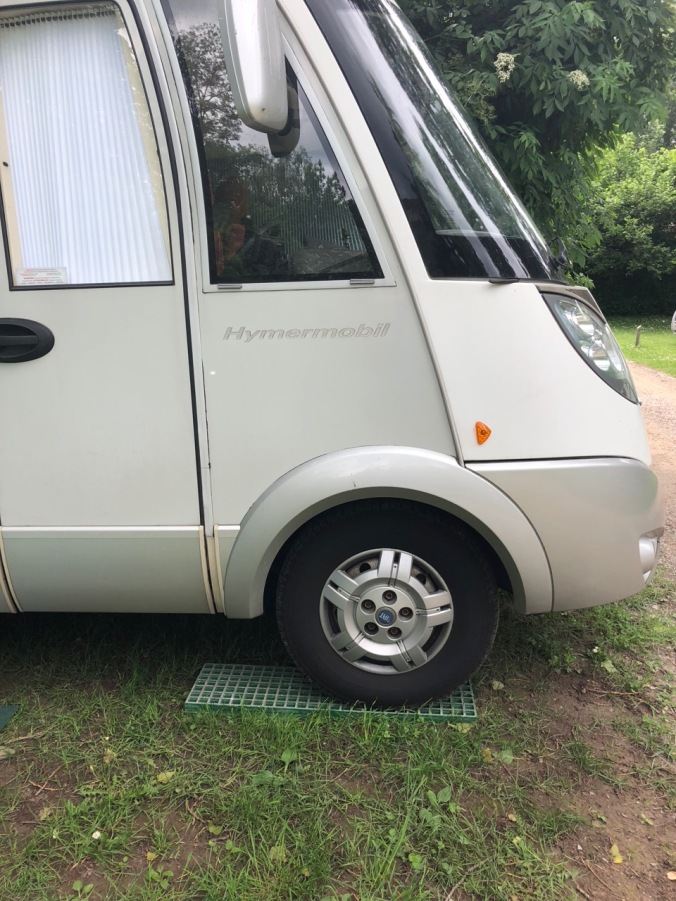 Would you believe it Millau is another place on our trip that lays claim to having 3,000 years of heritage! The Gauls originally had a town up on the hill; just before the Romans invaded they moved to a site just at the back of our campsite. From 30 AD, for the next 200 years it was the centre for mass-produced, high-quality ceramics. Red, varnished Terra Sigillata was exported all over the know world and remnants are still being found across the old empire.

The Roman version of Stoke-on-Trent

In the Middle Ages it was conquered by, and became the base of the kings of Aragon who built a mighty castle across the river from the old roman town. All that’s left now is a tower called the Millau Belfry which looks a little sorry for itself in the centre of the old town.

The remains of the Kings of Aragon’s castle

After a brief spell as the centre of the French glove making industry it is now famous,well known, listed in Wikipedia for the A75 Viaduct designed by Norman Foster and as France’s capital for outdoor pursuits, hiking, mountain biking, caving and parascending. Next door to the campsite a tough mudder type race was happening and there was a VTT (mountain bike) event too. Unfortunately we arrived too late for me to join in.

Even the Tough Mudder’s bubbles are getting excited!

The McDonalds I mentioned earlier was the site of an unusual protest in 1999. Jose Bove a local anti-globalisation activist demolished it. It was a protest against globalisation and the tax increase the Americans had placed on Roquefort cheese in retaliation for the EU banning GM foods. The restaurant was rebuilt, Jose spent a couple of weeks in prison and he is now a member of the European Parliament!

Our brief visit to explore the town’s delights reminded us that this was our first Sunday in France this year and we had forgotten that France, especially rural France is shut on Sundays! The only people we saw were tourists like us, trying to find something worthwhile to gawp at or the mud spattered, dripping competitors from the races.

As you will have noticed from my patent planning device above; our next stop is Cahors – and we all know what that is famous for don’t we?