Yesterday (Tuesday) was a bit of a whirl and I forgot to blog!

We had an easy journey from Derby to Folkestone and so got on an earlier shuttle and arrived in Calais at 1700. Our original plan was to go to an ‘aire’ at St Omer but we changed our minds as now it was a lovely evening with brilliant sunshine and chose instead to follow the coast road west.

I don’t know if it was just the sun but this bit of coast looked stunning. it must be one of France’s best kept secrets. We passed the Plage du Cap Blanc Nez which is one of the Sunday Times top 50 European beaches and then on to the Plage du Cap Gris Nez which is just as good. We then skipped around Boulogne and ended up at Le Touquet also known as Paris Plage. Its a very swanky place and so they have hidden the ‘aire’ down on the estuary by the yacht club. That didn’t matter to us as it was next to a wilderness of dunes that was interlaced by way marked paths. It was just right for Alf to have a good run and some stunning views across the river and down to Etaples.

There were only half-a-dozen other vans with us so it was a very peaceful first night in France. 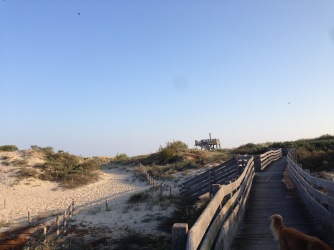