We set a new world record time for getting on the road this morning. We were on our way by 1000! Wendy and Alf in the direction of the Intermarché supermarket and then on to Gouarec. Me off to Gouarec via a cheeky little route I had found walking the dog in the morning. This had the advantage of avoiding of the big hill back into the town centre.

Our depart also included saying goodbye and ‘bonne route’ to some new pals. Last night, two lads, Peter and Andrew rolled into the campsite followed by Bill, Peter’s dad who was providing back up in his car. They were much more hard-core than we are. Bill had driven down from North Yorkshire on Friday to pick up the two friends from London, driven on to France on the Saturday via Calais stopping at Granville and then driven straight to Roscoff yesterday morning. Peter and Andrew had cycled from Roscoff to Carhaix in one go. It turns out that Bill is a member of Scaling Dam and knows all the families of the children who sailed with Katy and Hannah in Optimists.

Anyway, my cheeky shortcut took me back into the centre of Carhaix up an equally big but longer hill. I seem to becoming the master of the long cut and at the moment every metre counts! In Roman times Carhaix was the centre of seven major roads and it seems that all roads still lead to Carhaix. The good news was that was the only bit of shared road cycling all day. I took another disused railway south out of the town and led straight on to the canal. At least 40 of today’s kilometres have been along the Nantes-Brest Canal. This enormous canal was built on Napoleon Bonaparte’s orders in 1800 because of the blockade the British Navy had on the Brittany ports and was an attempt to alleviate the stranglehold. It was built on a much grander scale than the British canals of the time because it was a national project rather than by private finance. They also used British prisoners of war as free labour. The canal is roughly three times as wide as the standard British one and certainly deeper. It sweeps through the countryside densely wooded on both sides, which provided me with plenty of shade. Today was the first time it was warm enough to ride in a T-shirt so shade was good 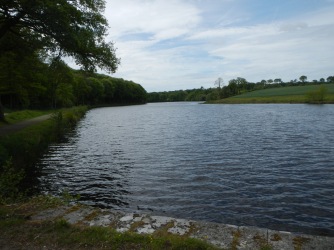 After my legs lost their morning stiffness the going was pretty good. The towpath was wide and well surfaced, with tarmac in places. I was able to concentrate on improving my style – today the focus was on cadence. On such a good surface I was able to keep the gearing low and aimed for 80 rpm. I am sure my knees will appreciate it in the morning.

At Plelauff, just short of my destination, Wendy and Alf were waiting to greet me. They had cycled back to meet me (no small feat for a dog!). It made a change to have some company. There had been very few people on the ride today. I saw more locks than humans. It was strange too how there was little wildlife; no coots, no moorhens, no ducks, though we did see a solitary heron as we came into Gouarec.

The canal is really well maintained I passed people repairing potholes, removing trees and even a horse drawn lawn mower. It’s a great place to cycle. Tonight’s campsite is Camping de Gouarec on an island in the canal, right by the village. Though it rates as basic on Wendy’s scale; location is everything. The village is really pretty and boasts three restaurants, however they are all shut on a Monday evening so no quiet stroll to a bar for us tonight. Still Wendy has a three litre bag of wine stashed in the ‘fridge. 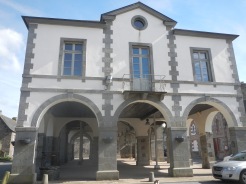 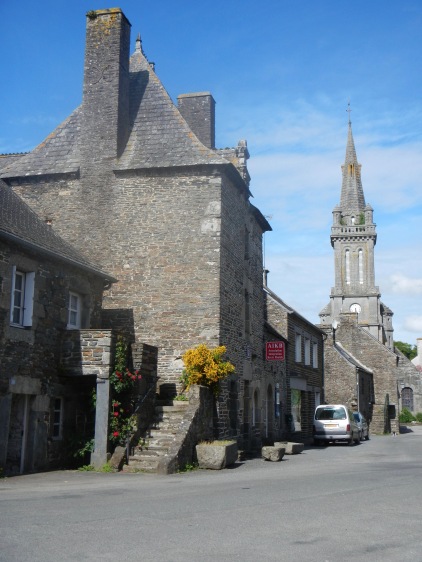 Breaking news: the campsite owner has told us that the bar by the bridge is open tonight and Wendy wants a crepe!

Wendy wants me to copy this in our garden

It’s a tough life on the road, but we are coping.