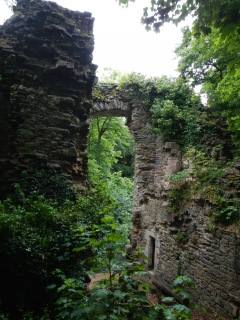 What’s left of the entrance to Chateau Rieux 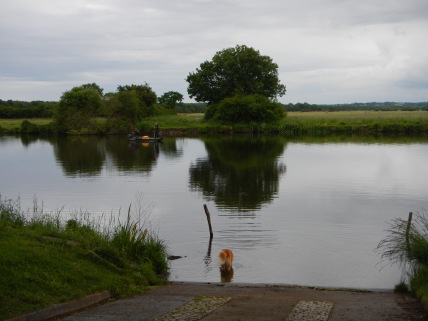 This is where I should have crossed

It was hard work today.

Well clearly not as hard as work; I can still remember what that was like – just.

But for someone living the carefree, gadabout lifestyle I have been trying to perfect for the last nine months today was tough. The effects of the big day yesterday were clear from the get go. Every step of Alf’s walk this morning sent my legs’ synapses complaining. When I started cycling it was no better. Still today was going to be six kilometres shorter than the 70 planned due to starting from Rieux (with a lift back to the bridge) rather than Redon.

After a bit the lactic acid moved on and I settled into the best rhythm I could along the bumpy track. Today was not going to be a day of records. I got to Guenrouet in better than even time. The next stretch of cycle path had been recently re-laid. I am sure that the contractors who had completed the job will have one prizes for their handiwork, there will certainly been lots of back slapping and congratulations going on, even some champagne poured. The path looked great it was smooth, flat and even. The photos they will have sent to their colleagues and partners will have been much admired. However!

The person who signed off on the aggregate to be used for the job deserves a public flogging! Whatever the stuff was, it took one look at a drop of rain and turned into a stiff paste that not only grabbed at your wheels but also clogged up the space between the tyres and the mudguards until you could cycle no further. Every 400m I had to stop and use a twig to scrape the crud away. I became quite an expert in twig assessing. It had to be thin enough to fit into the slender gap but stiff enough to give the clart a good seeing to. This went on for miles and miles kilometres and kilometres, all the way to Blain.

Just some of the mistletoe on the way

Once passed most of the crud, they hit me with a ford!

Once more there was a twist to the day’s end. The Velodyssee website gave clear directions as to how to get from the trail to Nort sur Edre. “Once you get to Quiheix Lock, cycle on for about 1km and then follow the signs to Poupiniere.”

I cycled to the lock and found that I could go no further. The trail ended at the lake. I couldn’t go ten metres on, let alone a 1000. Fortunately the lock keeper’s house had a map of the local waterways and I worked out a way to get to tonight’s destination but the result was that the day’s distance was 6km longer than expected and Semper Deinceps was telling me he was running out of charge.

Some observations from today’s ride:

When we crossed the Vilaine this morning we left Brittany and entered the department of Loire Atlantique. It took six days to cross Brittany and also say goodbye to the Nantes Brest Canal that has meandered here there and everywhere for the last 267km.

Today I also set a new personal best for seven consecutive days cycling. I don’t know if that will ever be beaten. I have cycled 380 km in that time and at the moment every muscle and sinew in my legs, back, arms and neck hurts and I think I am about to get vibration white finger in both my hands. Thank goodness for Voltarol (other brands of Ibuprofen gel are available).

At the same time Wendy has been having her own trials and tribulations as has Alfie. In the coming days they will be sharing some of their insights into touring with Howard. Here is a quick taster…

This evening we managed to get ten days worth of washing done and dried in an hour and a quarter. Well worth €8! (That has whetted your appetite hasn’t it?)

Tomorrow we are having some well-deserved R&R in the fleshpots of Nantes. In particular we hope to get to Les Machines de L’Île, which has been strongly recommended to us by Daren and Chris.