My office this morning is on the decking outside the bar, overlooking the lake at a blue sky dotted with fluffy blue clouds. It is one of my favourite views and a mental photo used to get me through some of the long dark dull days of winter at home in Derby. As an extra there are sandy coloured lizards scuttling across the boards around my feet. You don’t see lizards in the high season!

So much for my plans for a celebration last night. I had three glasses of red to go with pork chops and crushed new potatoes in a mushroom sauce quickly followed by an early night as I fell asleep in mid conversation, something I haven’t done since I retired. I then had ten and a half hours of unbroken sleep, longer than Wendy even – unheard of.

Yesterday Wendy and I drove from the campsite to the ferry port to catch the boat across the Gironde to La Verdon on the tip of the Medoc peninsular. It wasn’t something she fancied doing on her own and it was cheaper if we travelled together rather than separately. At this time of year the ferries are only sailing about eight times a day so we had to wait an hour to catch the next one at 1110. From early morning it had been raining off and on with the occasional rumble of thunder (Alf is still worried by the thunder – but only when he is indoors). During the crossing the skies seemed to be clearing – it is always sunny at Lacanau. 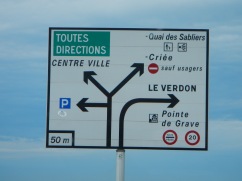 Our first job on landing was to find a supermarket as we were lacking essential stores such as white wine and white wine. The supermarket at Soulac had been blitzed over the weekend. It was clear they had been very busy and hadn’t had time to re-stock, everywhere there were empty shelves; including the white wine! Would you believe it a French supermarket without vin blanc? Wendy tried to hide her disappointment by having a furtive smell of a few melons, but I caught her.

No melon is safe – and have you seen the size of the tomatoes?

Not only was the supermarket empty but so were the petrol station’s tanks – sans gazole. We weren’t really short of diesel but Wendy likes to always have at least half a tank and the urgency had arisen because we were getting close to half empty as she puts it – or as I say… well it doesn’t really matter what I say!

Time, a fatigued body and the desire to get to le Tedey by nightfall meant that we drove to Naujac-sur-Mer and had lunch and I set off to cycle to places that sound very familiar; Hourtin, Carcans, Maubuisson and Lacanau.

It was another day of great riding. The cycle tracks were tarmac, and along one stretch even better than neighbouring road. It was along a broad avenue through the pine forest with that great smell of hot, French pine forests. From Carcans the track narrowed to a twisty trail through more mixed woodlands. I had forgotten about the many short, steep hills across the dunes from Maubuisson to Lacanau were real killers for tired legs. I guess if I were fitter the lactic acid would be flushed away more efficiently. It is the first section of the route that La Velodyssee has labelled category four, ‘expert’. All the other stages have been categories one or two – I really am an amateur at this,

Just before Lacanau the trail meets the Bordeaux to Lacanau trail which follows the route of the railway line that opened at the end of the 19th Century and signalled the birth of Lacanau as a resort for the worthy citizens of Bordeaux and further afield. The junction of the two trails marks the spot where I had the beginning of the idea to do this journey last August. We were staying in a villa at the north end of the lake (Moutchic) and I was out for a run with the dog when I came across a couple trying to take a selfie of themselves, their heavily laden bikes, and a signpost with an orange symbol on it. I offered to take the photo for them and they explained what they were doing, that they were cycling from Spain to Roscoff along La Velodyssee. Bingo! Now the rest is almost history, well it will be in a week’s time.

As I stopped to take a photo in the same place it hit me how much this meant to me. Up until now I had considered the objective of this trip to be riding from Roscoff to Hendaye. I hadn’t realised that reaching Lacanau was of almost equal importance to me. It was great to turn left and cycle into Moutchic and then along the empty road to Carreyre where we stayed with Dave, Gaye, Alex and Jenny Evans in 2000 and 2001with whom we first discovered the delights of both Lacanau Ville and Ocean. 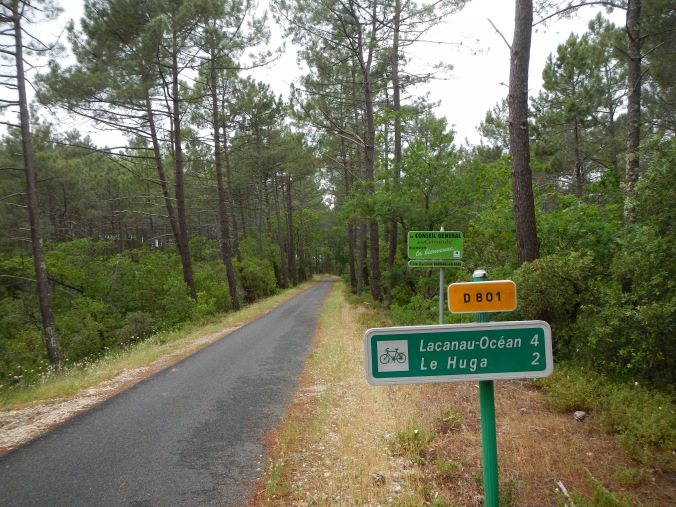 Many times I had pictured cycling into Le Tedey as part of this trek and recently it had appeared in some of my dreams too. Always the vision included sunny, blue skies. But yesterday it was grey and overcast. At least the rain had stopped. 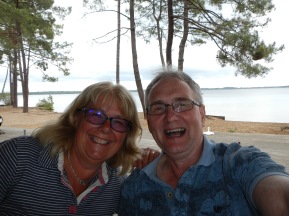 The main effects on my body are…

The plan is to have a couple of days rest and enjoy being here. We will then continue south on Thursday. Which is a great coincidence as we have just heard that Andy and Lesley are on their way to join us. As I write, they have caught a fast ferry to Cherbourg and are hoping to be with us by tomorrow evening in time for supper, which I hope means teatime rather than ‘cheese and biscuits before bedtime’.