It was a glorious day today and this has become my new favourite section (despite a minor drawback). 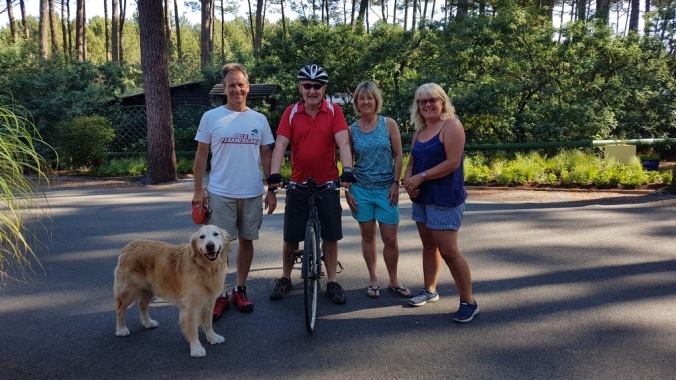 My mouth was a bit dry this morning as I set off. Whether that was due to the nervous excitement of being back on the road again after a couple of days off or because of the bottle of rosé and bottle of red we had with dinner last night, and then a bottle of white at the bar to drown our sorrows that the crêperie had shut, I am not sure.

As you can tell from the spike in the alcohol intake, Andy and Lesley have arrived. They got here mid afternoon yesterday (Wednesday). I don’t know whether we were more pleased to see them or Alf was more pleased to see Rio, but the two dogs enjoyed and afternoon in the lake together and then off for a long walk through the forest along the shore towards Longarisse. It was Lesley and Andy that found this campsite all those years ago and it was great for them to be here to share it with us on this trip. 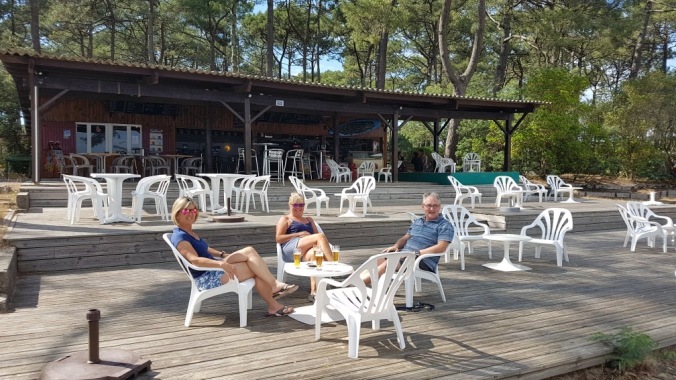 The route today included another of my alterations to the official La Velodyssee route. Rather than take the fairly uninteresting route around the bay of Arcachon I planned to cycle down to Cap Ferret and take the ferry across to the bay. Today’s jeopardy would be having to get to Cap Ferret in time to catch the 1230 ferry otherwise I would have to wait for another two hours until lunchtime was over.

It was a good ride through the forest this morning from Le Tedey to Plage du Lion and I was sweating out last night’s wine. The beach side track from du Lion to Le Porge was a bit rough, with a lot of pot holes to avoid but I pressed on I knew I only had 90 minutes or so to get to the ferry. The trail from Le Porge through the forest to Cap Ferret was good tarmac all the way though a bit narrow and hilly across the dunes. It burst out of the woods less than a kilometre from the port. I had done it with six minutes to spare!

But where was the ferry? The pier that constitutes Cap Ferret port was empty, no boat, no people, nothing apart from a marvellous view across the bay to Arcachon and the Dune de Pyla. Even the little shed that was the ticket office was closed. Reading the notices outside the shed I saw I had made a mistake. Despite it being the first day of the meteorological summer (pinch and a punch and all that), the ferry was still running to its winter schedule, which meant that the last ferry in the morning had been at 1130 so that the ferry time could have an extra long lunchtime to make sure they had a hot meal. Despite my best efforts (I had achieved a new best 40k time on the way) I was still going to have to wait for a couple of hours.

Cap Ferret was very busy, all the restaurants were full, probably with people who had wanted to catch the 1230 ferry, and the sun was doing its thing. I found a good shady spot and had my lunch and waited. 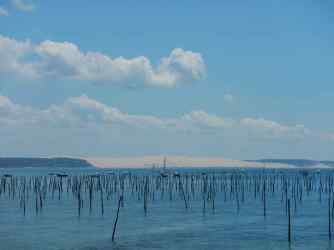 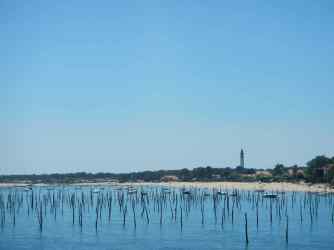 The trip across the bay was worth the wait. In the bright sun everything looked stunning and much better than my photos show. We landed right on the pier outside the restaurants that we have eaten in on our visits to Arcachon, so it was right in the centre of the action, but because it was 1500 there were no buskers or artists or dancers out yet. 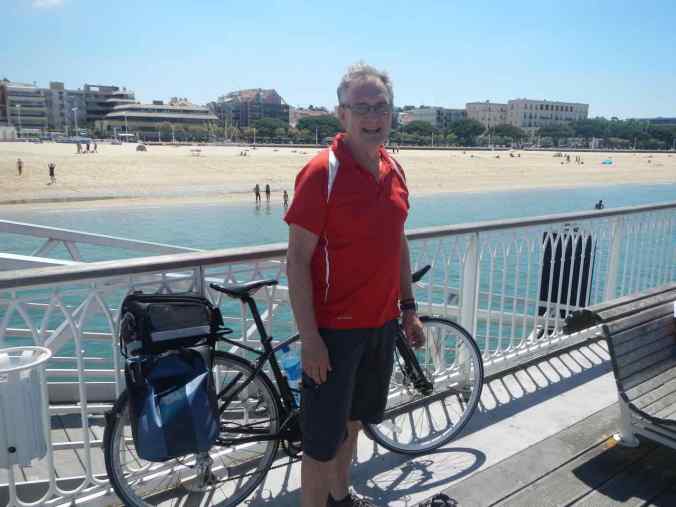 Taken by a friendly American on Arcachon Pier

It was a bit of a wriggle getting out of Arcachon and through La Teste de Bouch. I had to navigate myself back to pick up the Velodyssee in a car park outside La Teste and it was hilly and fiddly staying to the back streets to avoid the dual carriageways. Once back on the trail it was a new cycle path alongside the main road to Pilat and out past the Dune de Pyla, (the Dune is the biggest dune in Europe and 3km long – I measured it!) and past Camping Petit Nice where we stayed in… well I am not sure. It was when Andy and I sailed in a French National Championships in Pyla but when we discussed it this evening we couldn’t remember when it was – perhaps a younger memory can help us?

I could tell this bit of track was good as I met lots of lycra-clad chums coming the other way who were using it on their road bikes. Usually these chaps keep to the road. Wendy, Lesley and Andy had arrived at the campsite in Biscarosse Plage over five hours ago and I was keen to meet up with them so I got my head down and gave my legs another workout – two in one day. Just before I got to Biscarosse Plage I passed a sign showing I had left the Gironde and am now in the Landes Department for the next couple of days.

I steamed into the campsite to surprised the gang and me by turning up 40 minutes earlier than my expected arrival time and the gang weren’t there – they had gone exploring. It turns out that they had not been too bothered by my ferry delay as they had made full use of the campsite’s great pool and dined out in town. 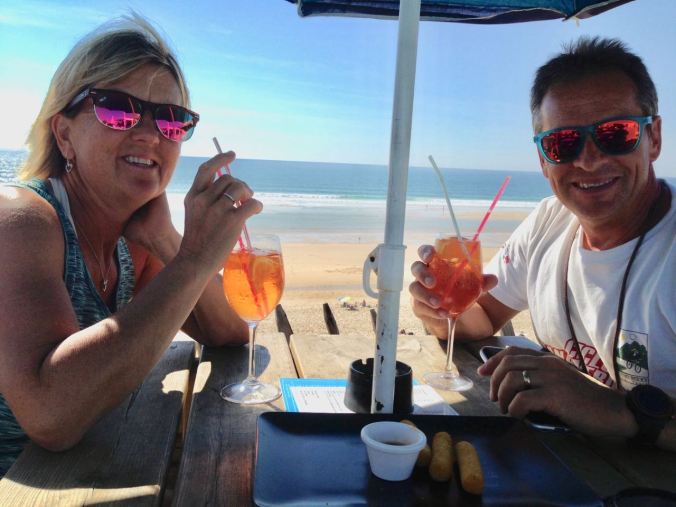 The stats show that today’s two legs (and my own) have given me, apart from my fastest 40k, my best average speed, my second longest day (84k) and my second hilliest day.

With a bit of luck we might be in Spain on Sunday?