At 1130 yesterday morning I crossed the bridge over the river Bidasoa from Hendaye into Irun, Spain and in doing so, completed La Velodyssee.

I left you last time with Wendy and I ‘discussing in a mature and sensible fashion’ who was going to take Alf out in the rain. Fortunately the rain stopped for long enough for us both to take him and find a shop selling bread on the way back. Then the rain returned and picked up where it left off for most of the night.

We awoke in the morning to leaden skies and a distinct chill in the air. The only change to our now familiar routine was that I put my bike on the back of the van and we drove off together. This was due to the rain affected ‘Soggy Saturday’ and our decision to shorten the leg. The part of the trail through Bayonne and past Biarritz to the pretty little town of St Jean de Luz is now lost forever.

It was really obvious how the landscape changed south of Biarritz. We were now in the Pyrenees Atlantique, suddenly there were hills and mountains in the distance (you couldn’t see their tops because the clouds were too low) and the style of buildings changed too – they had an almost Tyrolean appearance.

Don’t these look Tyrolean to you?

Wendy dropped me off in a lay by and I strapped a regulation red and white, diagonal striped board to Wendy’s bike, because the next time we met would be in Spain. I set off with a funny feeling – this was going to be my last day, finally I would be riding into Spain and that would be that. I made the most of the short trip, enjoying the views, taking photos, savouring the experience of at last being able to cycle without having to think about it and generally trying to make it last as long as I possibly could. It was funny that three weeks ago in Roscoff I remembered all the little prevarications I made to delay starting off; now I was trying to avoid finishing. 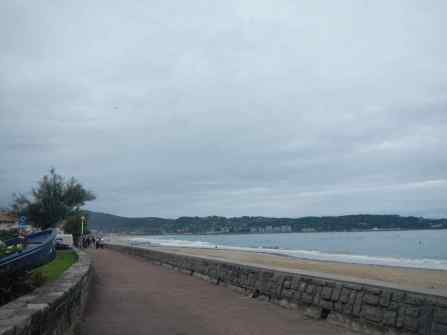 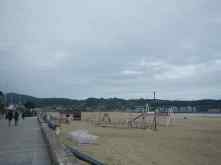 Hendaye Plage is an elegant resort, even in the rain – yes dear reader the brollies were up. It has a popular surfing beach and an impressive prom along the front. The route then turned inland, up the river to the marina, which was probably the biggest I had seen (bigger than La Rochelle or Sables d’Olonne) and along an impressive boardwalk to the bridge. The traffic on the bridge was busy for a Sunday morning but I stopped half way to take some photos and then on to the car park that signifies the end of the route and where Wendy was waiting. Just like the start at Roscoff, there is no sign or anything to commemorate the significance of the place just the absence of any more La Velodyssee signs pointing the way (unless you want to turn round and go back!).

That’s Spain over there

I had done it, cycled the length of France, travelled from Roscoff to Spain and clocked up over a 1000km (640 miles Mum) in a shade over three weeks (19 days of cycling). The project that I had thought about on and off for the last 9 months was finished. It felt good, but tinged with a little sadness that it was over – Like that really good mug of tea you don’t want to end.

One of the less welcoming sections of the Velodyssee 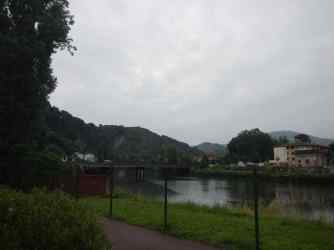 It turned out that the reason the bridge was so busy, as was the car park that we were in, was because we were surrounded by supermarkets. There were hoards of French people stocking up on spirits and cigarettes as well as meat and wine. Because that’s what their customers wanted; that is what they sold and really not much else, apart from duty-free style displays of Toblerone. 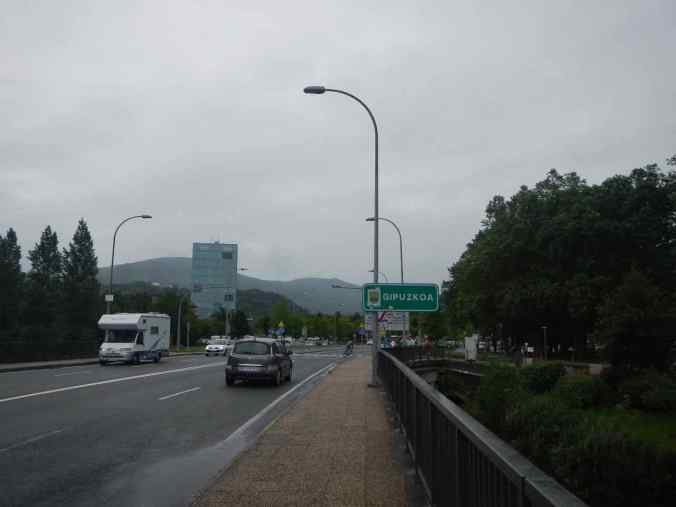 I think that means ‘border’ in Spanish (or possibly Basque)

Well we joined in, it would have been rude not too, and got a bottle of Rioja and some lamb for a celebratory meal, jumped in the van and got the sat nav to plot us the fastest route back to le Tedey, away from the rain in Spain to the sunnier and warmer climes of the Gironde.

We got back in time for a good walk along the lake to the sailing club’s bar for a beer and then back to enjoy the delights of Lesley and Andy’s cooking again – the lamb can wait until tomorrow.

So that’s it – it’s done and dusted. Thank you for bearing with me over the last four weeks and taking the time to read this drivel. I hope you have enjoyed reading it at leat half as much as I have writing it. I don’t intend to carry on with the ‘blog for the time being as we are now going to have a proper holiday for the next couple of weeks and I have got some big favours to pay back to Wendy, and you don’t want to hear about that, do you? I will, over the coming days, try and put together a more thoughtful overview of the whole journey, but those of you who have subscribed to this will get an alert when I do.

Now I am off to find another bottle of Breton cidre and plan the next adventure – any suggestions will be gratefully received.