It was a little overcast as we cycled out of the campsite and through the woods to Lacanau Ocean. The smell of pine after the overnight rain was soft and comforting, a reminder of good holidays in the past. As we drew closer to LO the amount of blue sky was slowly increasing from the north west and by the time we had shackled our bikes and strolled to my favourite bar for morning coffee, the sun was shining strongly enough for me to be glad of the shade under the canopy overlooking the ‘Singe Rouge’.

The Singe Rouge is a LO institution. It looks and feels as if it has been part of the high street forever. It sells, amongst other stuff, high end beach ware; balls, flip flops, body and skim boards, buckets and spades, kites – you know the sort. It also sells expensive tat, ornaments and bric-a-brac that looks great in the shop on a sunny day in lovely Lacanau, but looks gaudy and cheap the moment it crosses the Channel, just like a French beer or a bottle of pastis loses its flavour in the cold light of the UK. But long may the Singe Rouge reign on the High Street with its faint recollections of holidays in simpler times.

The café-au-lait was good, but I didn’t have time to hang about, I was on a mission. A mission unbeknown to all but my nearest and dearest. I drained my cup and took my leave of the others and headed down the street for my assignation.

I was told to wait five minutes and then ushered to a chair; “Je voudrais un faire egalisé, SVP.”

I must have got the code correct because in five minutes I emerged, blinking into the sunlight, with my hair now ten millimetres shorter all round and I no longer looked like a scruffier version of Patrick Moore. It was such a transformation that Andy, Lesley and Wendy didn’t recognise me at first as I caught up with them window-shopping.

The surf was up and, from the beach terrace of the ‘Kayoc’ restaurant, it was easy to see why people from all over the world are attracted to this part of the French coast to surf, sunbathe and otherwise play on the endless, perfect, sandy beaches and in the bluest of blue seas. The self styled ‘bodegas’ is the place for a future petit dejeuner without a doubt. 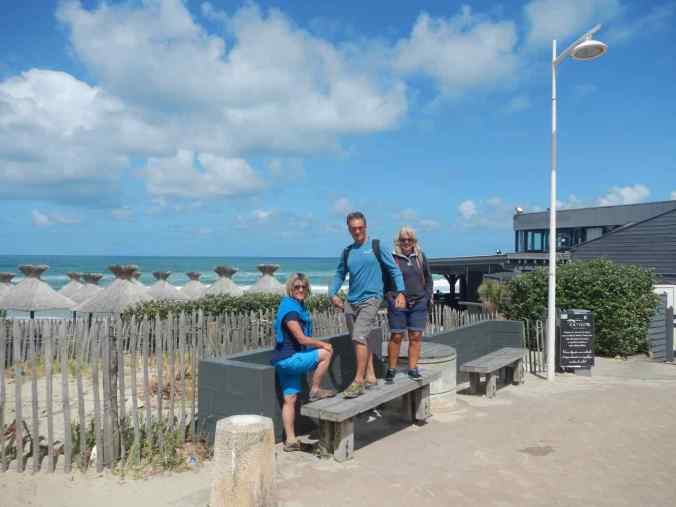 We strolled back up the street to the fishmongers to buy the prawns and mussels for tea and also to join the locals in a plate of oysters and a glass of rosé for lunch. This is the stuff that Rick Stein’s dreams are made of.

Feeling suitably refreshed we then cycled back via Moutchic in time for a quick change into beach stuff and a 1400 rendezvous on the beach with the canoe girl. We surprised Andy and Lesley by turning up with Alf in tow and when canoe girl showed her appreciation of our idea to take Alf on a canoe built for two, Andy dashed back to get Rio.

With a light breeze blowing from the south west we set off with high hopes of getting to the Isle de Oiseuax in better than even time, after all it is only just over there isn’t it? As we pulled away from the shore two things became apparent; the wind was blowing more strongly than we thought and was against us and more importantly both vessels had an alarming tendency to veer to port. Andy and Lesley’s canoe was worse than ours and they even tried swapping their positions but to little effect. The only way we could counter it was by me paddling mostly on the left and even then needed Wendy to join in too when the lurch became too severe. 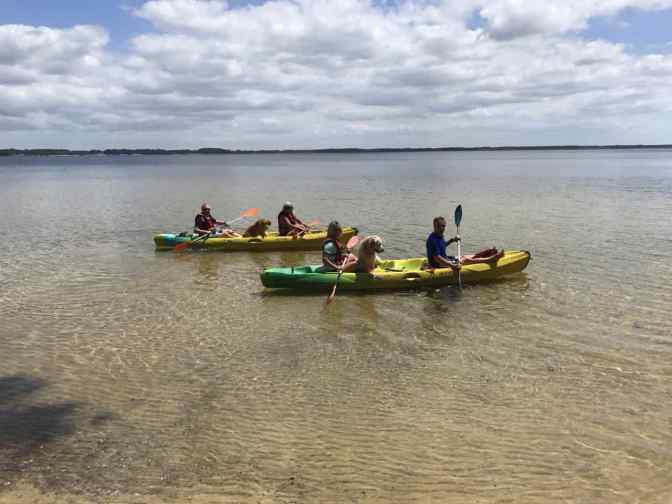 To add to the mix both dogs decided they were to old for new tricks, such as canoeing, They huffed and puffed their concerns and scrabbled around trying to find a place where they could cause the most inconvenience to the harassed paddlers. 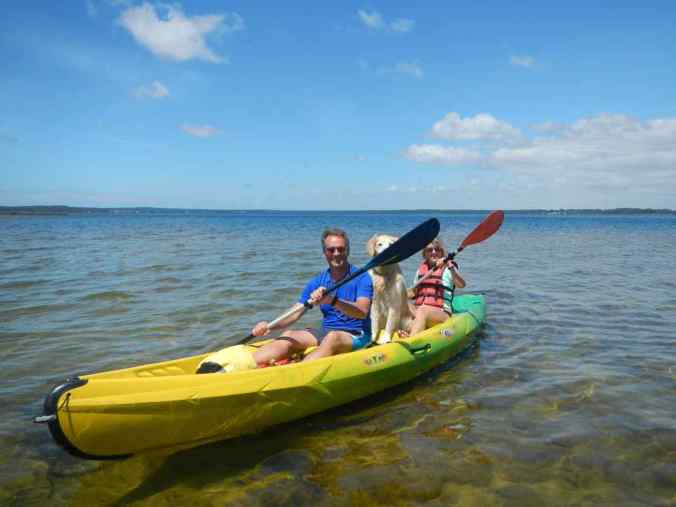 We paddled, and paddled and paddled. The island seemed a long way off and we weren’t even level with the sailing club yet. We paddled and paddled some more and eventually Alfie gave up whining for Rio and lay down in a more sensible place between us – still the island seemed a long way off. More paddling; is that a blister forming on my thumb. By now the island was clearly in view, the reeds in the shallows, the hunting hide and the small beach that would be our landfall if we keep paddling on the left, otherwise we will miss the island altogether. After 50 minutes of paddling we landed. The dogs jumped for the safety of dry land, and then back into the water for a drink. We had remembered cameras and towels (and Wendy had packed a few extra layers, just in case) but the only victuals we had between us were a couple of apples that Lesley had packed. There is no peace for the wicked and we had to get back in the canoes. We had already used up over an hour of our two-hour hire. Andy had used his time to polish the hull of his canoe and carry out a few other tweaks to improve its performance but nothing could prepare us for the fact that the wind was still against us on the way back and blowing more strongly. We took the ‘great circle’ route back to the beach to try and get into the lea of the shore, but it was ‘blinking’ hard work. The extra distance and the wind meant that it took us over an hour to get back, bloodied (my blister was) but unbowed and triumphant in the achievement that Google confirmed – we had paddled over five miles, twice as far as we had estimated.

After such a major physical achievement it was double ice creams all round (two boules of salted caramel is just divine), followed by a round of beers watching the evening begin to descend across the lake. 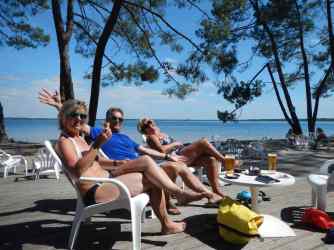 Reluctantly we dragged ourselves away for the final act of the day – paella at the Fozzies’. The morning’s prawns and mussels were added to some chicken and a few secret ingredients to make a mouth-watering mix that almost had us licking the Cadac clean. A great end to a day that will live long in the memory, a ‘mental photograph’ to sustain us through the cold dark days of winter while we are planning next year’s adventures, a truly memorable day.

One thought on “A memorable day”