We woke this morning to find a further 6 inches (15cm) of snow had been added to the general snowiness and it was still coming down hard. This raised the excitement levels to near fever pitch for both the skiers and we non-skiers amongst us.

Somehow we had all missed Lesley’s standing orders last night that included we were all to be ready for action and assembled outside by 0900 but we did make it for 1000. It was fascinating walking through the village and watching all the different types of snow clearers in action. Les Gets have got this snow clearing business sorted.

Andy and Colin were off skiing and the rest of us, snowshoe clad, trekked from Les Chevannes along the sous Ranfoilly path. What an amazing experience! Schussing through virgin snow at least 8” deep! 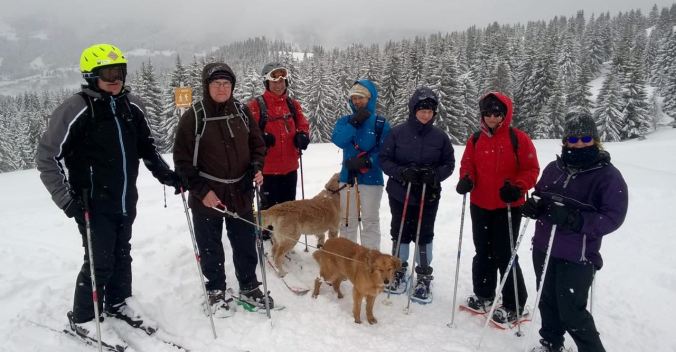 Just when the deep snow was taking its toll some of our party, Lesley announced that the restaurant was just around the next corner; and though we couldn’t see it, indeed it was. The very welcome Wetzet Restaurant. Andy and Colin had got there just before us and were just about winning in the battle to keep our table free from the other tired, hungry skiers. 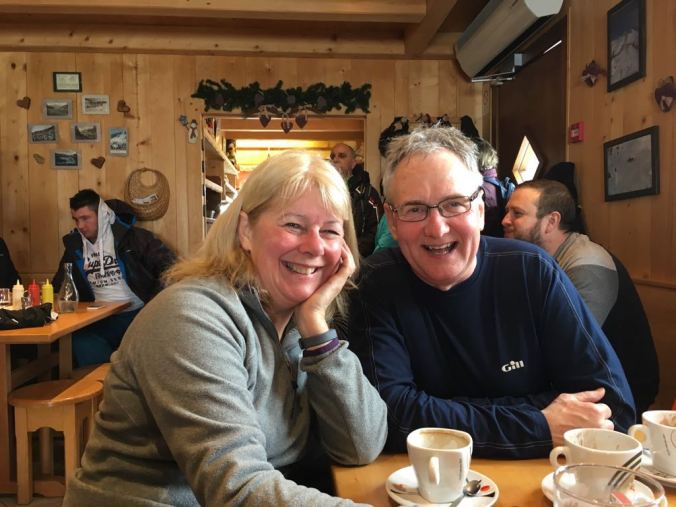 The stroll back to Les Chevannes cable car was much easier as we were going down hill and because we were able to follow the path we had beaten on the way up. At the cable car four took the easy way down for a bit of secret shopping and Lesley and I continued to the bottom with the dogs through the final flakes of snow. 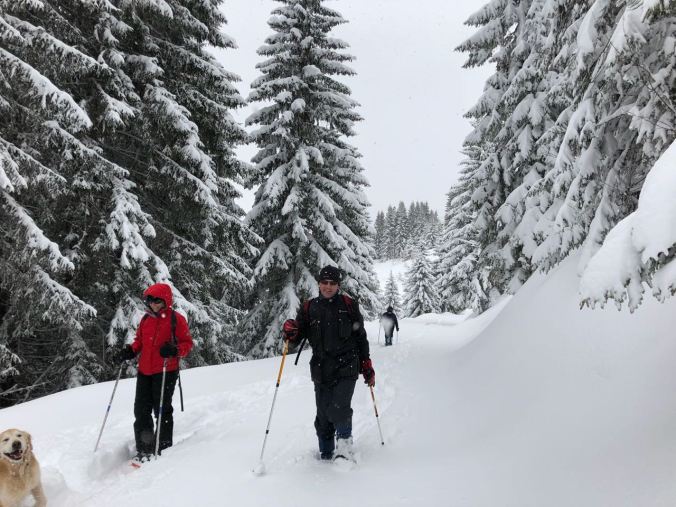 Now for some more jeopardy; we have booked Alfie in for an appointment at the vets, twenty minutes down the valley, in all this snow will we be able to get the car out and will we need the snow chains?

In true cable TV fashion it was an anti-climax! The snow clearing abilities of the locals meant that despite the heavy fall of snow during the day the roads were still black and easy to use. We got to Taninges well ahead of schedule for the vets. Alf was given a clean bill of health and Wendy, as usual, had to shove the worming tablets down his throat. Then we popped in to the supermarket for a quick spot of secret shopping.

Back at the chalet preparations were in full swing. The reason for all the secret shopping became clear. Tonight we were having an early celebration for Lesley’s 60th birthday. We are going to be away for the big day so Wendy had planned the surprise in conjunction with Rose and Fiona.

It’s going to be a big night so despite the standing orders it might be a late start tomorrow?