One of the first places on my list of ‘must sees’ when we began planning our trip down under was the Daintree Rainforest. The Daintree is the oldest surviving rainforest in the world, dating back millions of years to the time when Australia was part of the supercontinent of Gondwana. Rainforests in other places have died off and returned in the meantime, but scientists reckon that here the forest has been preserved intact by a combination of geography and climate. As such it has been the subject and backdrop of countless documentaries and is David Attenborough’s favourite place in the world (and he should know, there can’t be many places the BBC haven’t paid for him to describe in hushed tones).

We drove north from Port Douglas, heading for the Daintree River. The only way across the river is by ferry and as we watched it slowly cross the red, muddy, fast flowing water towards us, it was something of a disappointment to find that it was not being skippered by Humphrey Bogart in a stained white vest, but two very cheery women in smart blue overalls.

The mouth of the Daintree River

North of the river the bush felt immediately different. The road was twistier, narrower and the surface poorer (not long ago this was just a dirt road) and the rainforest pushing in from both sides and overhead so that we were driving through a lush, green tunnel. Every now and again there was a yellow diamond road sign with the silhouette of a cassowary reminding us we were a long way from Derby. 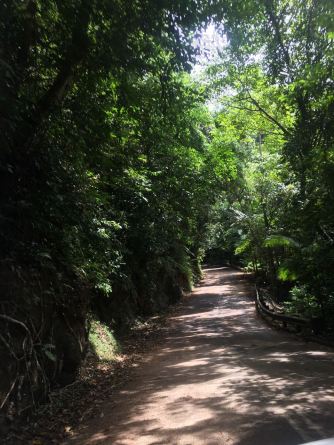 Our destination was the Daintree Discovery Centre, an environmental centre carrying out internationally recognised research into the rainforest and its role in carbon capture. It also had five, very informative trails through the rainforest. This was our third rainforest centre but it felt very different to the others. Here the undergrowth was thicker, the bird and insect noises louder, it was more humid (When we got out of the air conditioned car it felt as if we had been wrapped in a hot damp towel). There was a big notice at the entrance reminding us to wear insect repellent. We didn’t need telling twice and liberally applied it to every exposed part of our bodies.

The trails were excellent, board walks to protect the forest floor, and with markers every so often where we could listen to information on our personal handsets. Information both about the fauna and flora but also about the aboriginal perspective too. We climbed a tower 23 metres up into the canopy, we walked along an aerial walkway through the mid level and we worked our way through the interpretive centre. As we did so, Katy, Wendy and I began to scratch. Occasionally at first and then with greater frequency and more enthusiasm – the bugs were biting! Another application of bug spray all round and off we went to follow the Jurassic trail, explaining how the forest coped with the dinosaurs, but after minutes we were all covered in red blotches and wheals as the tropical insects laughed at our puny, temperate climate strength lotion and came back for another snack. We had to beat a hasty and undignified retreat, flapping our hands around us, back to the sanctuary of the car. Perhaps David Attenborough earns his money after all?

On the way back to the ferry, I glanced down one of the few side roads off the highway and saw a large, black bird strutting across the lane – a cassowary! I quickly turned the car around and turned down the lane, Katy hanging out of the window with the camera at the ready, but we were too late; the bird had flown or rather disappeared into the rainforest. I didn’t even get to hold my backpack out to it! Fleeting, as it was, it was a great moment to hold on to as we said farewell to the rainforest and drove back to the relative civilisation of Cairns and on to ‘Brizzy’ as out pilot called it. 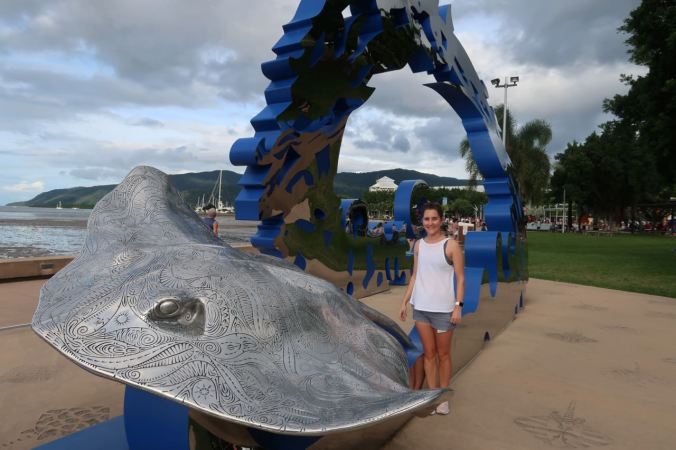 In other news, what about Anthony (Katy’s partner) I hear you ask? Anthony and his chums are enjoying a bit of a road trip in western USA. At the moment they are camped  just outside the Grand Canyon. The five of them are in an amazing camper van or RV (Recreational Vehicle); it even has an external TV! Have a look…