Having seen off a few sharks yesterday, I was on a roll. The adrenaline was pumping and there seemed like no better time to go and stare down a salt-water crocodile or two.

Salt-water crocodiles, or ‘salties’ as we established is the way most Australians refer to them, are more precisely called estuarine crocodiles. This is a better description of their most common habitat. They can exist in saltwater but much prefer the fresh and brackish water of mangrove swamps, rivers and creeks and their estuaries. They have been around for 200 million years (give or take a few centuries I suppose) appearing in the Jurassic Period and so outliving the dinosaurs by 65 million years. They have evolved as a perfectly formed apex predator; right at the top of the food chain.

All this I learned from Shania, our very informative guide at Hartley’s Crocodile Adventures just off the Cook Highway south of Port Douglas. Hartley’s began as a ‘roadhouse’ (an early version of the motorway services) in 1933 on the Cook Highway for travellers in need of a cup of tea or to replenish their fuel tanks before civilisation ran out. To encourage more people to stop the owner, Herb Evans, bought a crocodile (as you do!) and put it in a pond outside his café. Clearly it was an excellent business idea, or the beginning of a compulsive disorder, because before long the place became Hartley’s Zoo.

Returning soldiers from the Second World War found that one way to make a living was to hunt crocodiles for their valuable skins, and by the 1950s the crocodile population in Northern Australia had sunk to dangerously low levels, almost to the brink of extinction. A radical solution to this problem was proposed by early environmental groups – Crocodile Farms. Almost overnight wild crocodile skins became valueless thanks to a combination of legislation and the far superior product available to fashion designers from the farms. Today an A grade skin, one without any scarring, fetches $10,000! 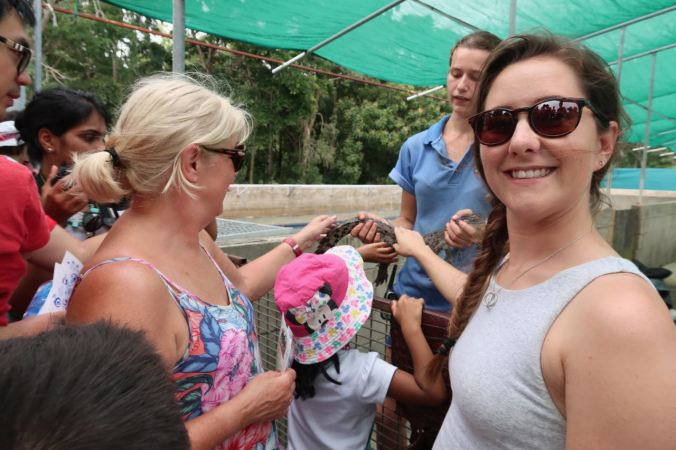 How may of these do I need for a handbag?

In the zoo we watched a couple of talks by the snake and crocodile keepers. Over the last twenty years the zoo, like many, has focussed more on education and conservation. We were kept engrossed by the snake expert who spent 45 minutes debunking the many myths that surround the most dangerous Australian snakes, all the while holding them up for us to see.

The incidence of snake bites in Australia have been reduced by 50% in the last 10 years and this is mainly due to education about snakes and what to do if you find one. Apparently more people died in Australia from vending machine attacks than snakebites last year! The vulnerable demographic for both types of attack, and crocodile deaths for that matter too, are drunk men, under 40! At least I am approaching 60.

You see these signs everywhere, even around Cairns Airport – it couldn’t be much simpler!

Just in case you are wondering, and it might come in useful the next time you are in the bush, if you come across a snake, leave it alone. To avoid crocodiles, stay out of the water and keep at least a metre away from the banks – simple. Oh, and it is a good idea to keep a crepe bandage about you at all times so that if you do get bitten you can tightly bandage the affected part to slow the spread of the venom.

With this sound advice ringing in our ears we went off to explore the rest of the zoo and get close up with the wallabies, koalas and kangaroos and admired the cassowaries from a respectful distance. By the way, should you stumble across a cassowary in Allestree Park, don’t turn your back on it, but back away slowly, holding your rucksack out in front of you. Those claws will disembowel you or slash you jugular!

We were having such a good time enjoying the delightful zoo and pondering on the many ways we might be hospitalised by its exhibits, that we had to be asked to leave by a very apologetic keeper who said they did have to lock up before dark!

One other thing I realised from listening to the staff is that I have been recklessly wasteful in using up four syllables every time I refer to this remarkable country. If you are a local, you conserve energy by using only two – ‘Strayl-yah!’ Look out for it in the coverage of the Commonwealth Games.