A subject that I haven’t touched on so far, in these scribblings on Australia, is this country’s many and varied types of animals that have the propensity to kill you. A lot of these live in the sea!

For example, I mentioned yesterday about the stinger alert at the beach that led to Wendy and Katy enjoying the afternoon by the pool. (I am not sure if they had heard about the myriad of venomous spiders and snakes that might be lurking in the undergrowth there?) The stingers in question turned out to be the notorious box jellyfish; a glob of goo that can grow up to 30 cm in diameter and have 60 trailing tentacles up to three metres long and has long been considered the world’s most venomous animal, it kills people very, very quickly. There are plenty of other coelenterates that will do an equally lethal job but don’t have as good a publicity team as the box jellyfish.

Then there is the aquatic menace that every one knows about, the shark. Every year swimmers and surfers are killed off the beaches of Australia by sharks, even if they are misunderstood and just mistook the unlucky surfer for a seal.

And of course we mustn’t forget the salt-water crocodile, the cold hearted, Jurassic throwback that silently strikes and kills you even if you are only looking at the water. ‘Salties’ (Australians just love an abbreviated nickname don’t they?) live in abundance in the inlets and mangrove swamps on this part of the coast just waiting for an unsuspecting tourist. If business is slow they will even attack a boat or go hunting on the nearby golf course.

With all this in mind, you can imagine my concern when Wendy decided we were going out to the Great Barrier Reef to go snorkelling;

‘It will be great we will be able to go swimming with turtles and see the fish and coral!’

‘But what about the stingers, the sharks and the crocodiles?’ I pleaded.

It was with some consternation that I found myself leaving the harbour at dawn on a boat heading for the reef. The fact that the boat was called ‘Calypso’ in tribute to the vessel of the late great Jacques Cousteau, one of my childhood heroes, was little comfort.

Bearing in mind that the best safety advice from Australia’s leading experts is to stay out of the water, the Lycra all-in-one body suits we were given did not look much like the carbon fibre body armour I had hoped for. Once dressed in our ‘stinger suits’, we all stood around on the boat looking like badly drawn pieces of clip art from the 1990s.

However, when we got in the water all the fears were washed away. There were turtles, there were corals, there were clams, there were sea cucumbers, there were brightly coloured fish and there were even sharks too! Though these were only small, black tipped reef sharks, they still displayed the grace and majesty of their bigger cousins as they chased the shoals of smaller fish into the shallows.

There is a shark in there somewhere!

My appetite for all things marine restored we stopped by the public slipway on our way back and bought a kilo of prawns for tea, fresh off the boat. 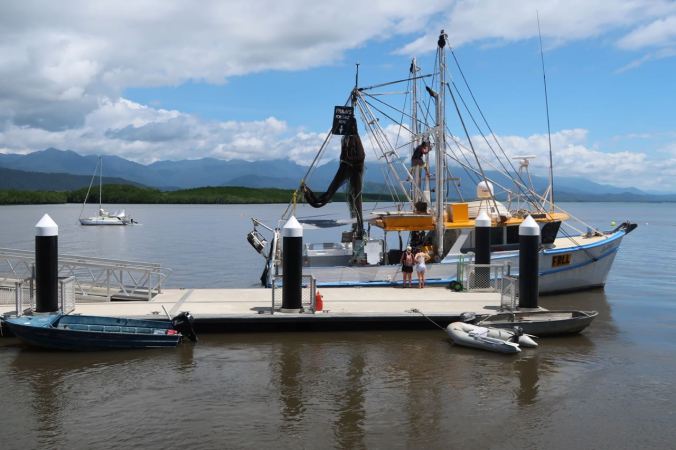 ‘If they are fresher than this then they are still swimming!’

The plan for the afternoon was to drive to Mossman Gorge and further explore the rainforest. The Gorge itself is a local beauty spot where the Mossman River tumbles over huge boulders, creating swimming holes and generally looking gorgeous. I suppose that is how it got its name! (See what I did there?) Recently it has been ‘developed’ in order to protect the local aboriginal community and at the same time support a training centre to increase their employability. When we got there it was slightly disappointing as after paying for the bus tickets and being dropped off two kilometres up the valley we found that the trails we were hoping to explore the rainforest by were shut due to the recent storm damage and all we were able to do was to poke about and try and take photos of the river pouring over the cascades that didn’t include the heads of overweight swimmers who were daft enough to avoid the multitude of signs warning of the dangerous river conditions. I half hoped we might be about to see evolution in practice!

We arrived back at the car a little crestfallen and in need of a pick-me-up; so fifteen minutes later we were the other side of the Mossman Valley driving through lush, tropical foliage into the grounds of the Silky Lodge Hotel.

Wow! This was like something out of the days of the Raj. The hotel had been built as a series of large wooden lodges interspersed through the rainforest along the northern edge of the Mossman Gorge. It was all large hardwood beams, polished floors and crisp, white linen. We were served afternoon tea at a table overlooking the river as bright blue butterflies the size of small birds played ‘chicken’ with the fans whirring above our heads. We took plenty of mental photographs and a few sneaky digital ones too.

The view from our table

The waiter who served us was full of the excitement that they had last week with the cyclone. The road we had driven up, the only road, had flooded and was impassable to all vehicles (it was over a metre deep and flowing fast) so the only way that the guests could leave was by helicopter. Just at that moment a torrential downpour began and we decided that if the road floods again, don’t worry about the helicopter, just book us in for an extra night or two!

One thought on “Stingers, Sharks, Turtles and High Tea!”