One of the key factors in the timing of our trip Down Under was to try and take in some of the Commonwealth Games that were taking place an hour or so down the coast from Brisbane at the Gold Coast City. Ant had entered the ballot for tickets months ago and was lucky enough to get us tickets for the hockey, cycling, swimming and rugby sevens.

Twenty-five years or so ago the Gold Coast was just a geographical area. The best-known community on this stretch of coast was Surfers’ Paradise. Surfers’ Paradise was the name of a hotel built by Jim Cavill in 1925 in the township of Elston and not long afterwards it became the name for the whole area in a bid to increase tourism. It certainly worked. By the 1980s tourism was booming along the whole coast and in 1994 the city of Gold Coast was created. That growth has continued so that the Gold Coast is now Australia’s sixth largest city and the largest city not to be a state capital. Sadly the Surfers’ Paradise Hotel is now long gone but the suburb is considered to be the centre of the Gold Coast and the main street is named Cavill Avenue in Jim’s memory (typically it is known by locals as ‘Cav Ave’). A blight on this ‘paradise’ is the beachfront skyscrapers. Lax planning laws, greed, graft or plan bad taste have led to the beach being overshadowed by tall buildings, including Q1 (the world’s fifth tallest residential building), that from lunchtime onwards cast their shadows on to the beach – I suppose it saves on sun cream? 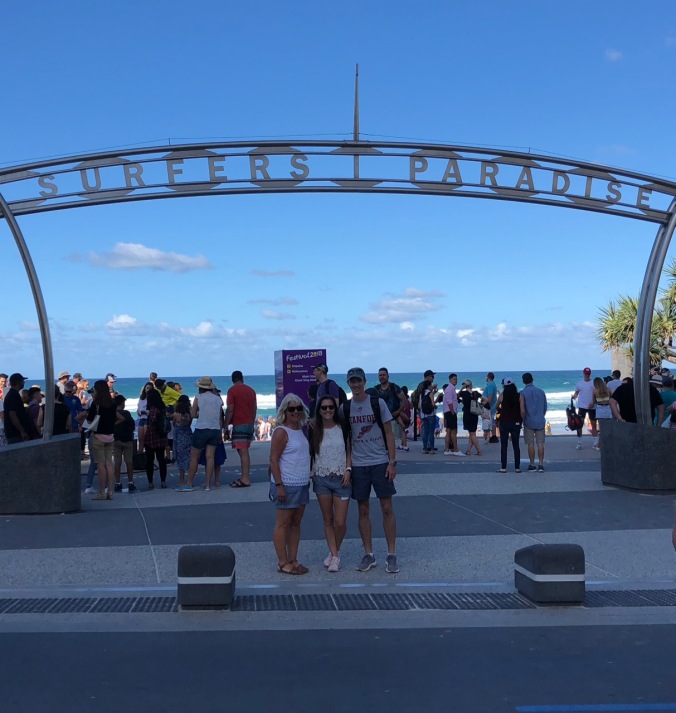 Standing in the shade

The Gold Coast and Queensland have really embraced the Games – the cycling was taking place in Brisbane and some of the basketball matches were being played in Cairns and Townsville. To avoid the predicted traffic nightmare, all ticket holders had free travel on all forms of public transport. We took full advantage of this. Our initial plan was to get accommodation on the Gold Coast but hotels and B&Bs had tripled or quadrupled their prices for the fortnight so we commuted from ‘Brizzy’. It was a pleasure to be able to catch a train from Kate’s local station and get off 90 minutes later either outside the venue or a short coach or tram ride away. The tram is one of the legacies of the Games and it is not often you see a tram with internal surfboard racks. At all the venues there were plenty of security booths so queuing time was kept to a minimum and would have been even quicker if I hadn’t had to explain the published policy on water bottles to the security man at the Cycling. 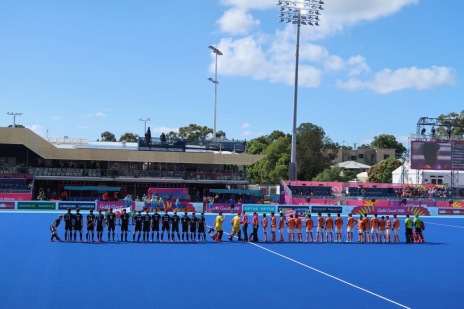 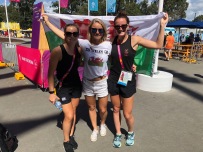 Welsh Hockey players who insisted I took their photo 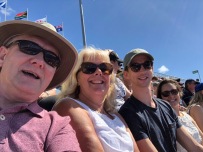 Ant’s back from the US 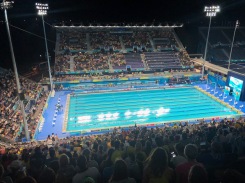 We had seats that gave us good views of the action though some did have their challenges, at the hockey and the rugby they were in full sun (I achieved a new personal best at the rugby sitting for seven hours in 32° – thank goodness for a hat, factor fifty sun cream and a regular supply of ice-cold beer), and at the swimming we were up in row 39 – so high there were bats flying below us and if it had rained we would have been OK as we were above the clouds! 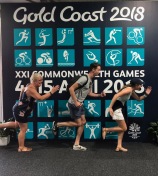 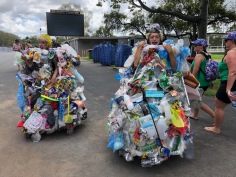 Some of my highlights were seeing Elinor Barker’s remarkable gold medal win in the cycling points race, the gripping women’s rugby sevens final between Australia and New Zealand that almost converted me to women’s rugby, sharing trams with athlete’s from all nations and seeing them graciously pose with children (and some adults) for selfies and the roar from the highly partisan crowds when an ‘Aussie’ won a medal of any colour. 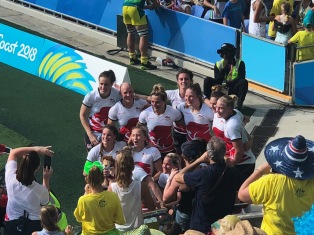 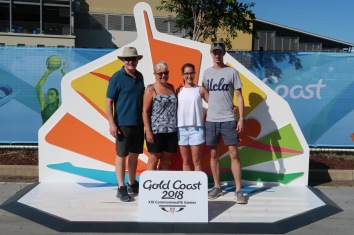 As I am writing this, the Australian media is giving the Games’ organisers a hard time over a decidedly lacklustre closing ceremony. There have also been concerns about the effect of the organiser’s comments about crowds on attendances. It seems that many locals have taken off on holiday to avoid the congestion and bars and restaurants were reporting quieter business than usual because no one could afford to stay in the city because of hotels ‘gouging’ prices. I heard an amusing interview with a Gold Coast resident who had gone on holiday to Cairns to avoid the Games not knowing Cairns was hosting the basketball and shooting! There were also hiccoughs with transport for the opening ceremony.  However for the four of us we had a great time and I am looking forward to Birmingham in 2022! Do you think the Brummies have time to arrange 30°+ temperatures and clear blue skies? 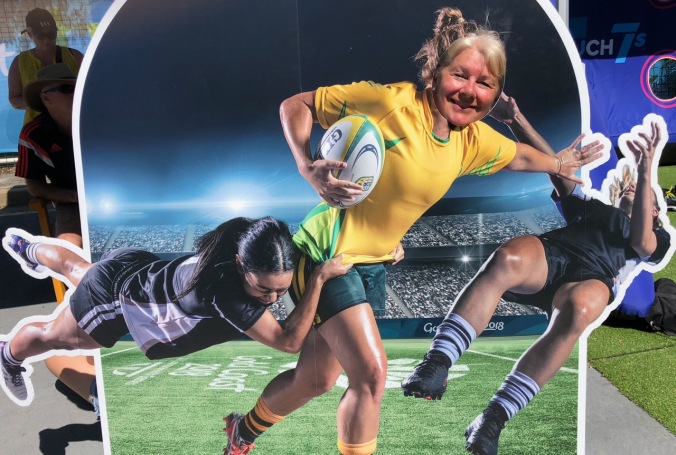 She could have been a contender!

One thought on “The Commonwealth Games”