What a sport packed weekend! Rugby League on Friday at the Suncorp Stadium, soccah on Saturday at Caboolture Sports Club and now Australian Rules Football (AFL) at the Gabba.

As you gathered from my last post, I didn’t expect to get to the famous Gabba Stadium, but I was wrong. This evening the Brisbane Lions were playing a local derby against the Gold Coast Suns at the Gabba. So Ant and I booked tickets and called a taxi.

I didn’t know much about AFL but watching it live makes it much easier to understand, especially if you have Ant by your side, than watching it on tv. The Lions are bottom of the league and the Suns are third bottom so it wasn’t going to be high class, but it was close, there was drama and plenty of passion. There cannot be another professional, invasive game sport that plays on such a large pitch or for such a long time (four quarters of 25 minutes with stoppages time added on at the end of each quarter), but it is easy to understand and gripping to watch. The Suns won 76 to 71. Another tick in the Australian box of delights. 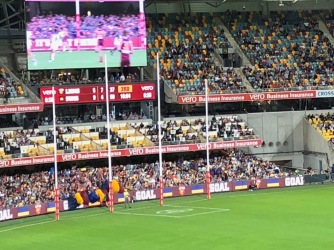 One thought on “I Got to the Gabba!”