I have often wondered if I might be a modern-day incarnation of a rain god? Back in ancient times, people would have prayed to me or offered sacrifices in the hope that I might bring rain to water the crops or ruin a neighbouring village’s cricket match. In the twenty-first century it means that rainclouds still like to follow me around. Over the last couple of months I have done my best to lose them by racking up the air miles and changing hemispheres, however in Switzerland the rainclouds finally caught up with me, and so pleased were they to have done so they were tumbling over each other in their enthusiasm to anoint me with their precious drops of water.

To try and shake them off again we were going to drive 240 miles, through three countries, heading for the hopefully sunnier climes of Salzburg.

We left Seehorn in just a light drizzle and took a tortuous fifty minutes to drive 20 miles along the lake into Lustenau in Austria to get a Go Box. For reasons best known to themselves the Austrians have come up with a byzantine system for collecting tolls on their motorways. How much you pay depends on the weight of your vehicle, its emissions and its number of axles. Despite having all the correct paperwork it took the attendant in the petrol station twenty minutes to process our application and give us the little radio controlled box that we stuck on our windscreen. When we leave Austria on Thursday, we have to go through a similar process to return the box and settle up how much we owe them. Finally sorted, and safe to get back on to the motorway, we drove into Germany heading for Bavaria.

Passing Munich there was an almost immediate change in the scenery. We could now see the foothills of the Alps and they seemed all the stranger for appearing to veer up straight out of the plain. We sailed through the German/Austria border, as we were already the confident possessors of a GO Box, the little machine pinging every kilometre. By the way, Wendy (who has a strange fascination with Go Boxes) says it has pinged 14 times so far.

You cannot outrun a raincloud in a campervan. They were still with us and had been joined by some Austrian chums, as we turned in to ‘Reisemobil – Stellplatz Salzburg’ though it did seem a little sunnier after the warm welcome (in English) to Salzburg and the campsite we were given by one of the staff as we came to a halt.

What a smashing van?

The stellplatz is new, it opened last autumn, and has been built to a very high standard, (it is advertised as a premium site) but it only costs 21 euros a night with electricity (19 without). It is part of a new chain that so far includes Vienna, Graz and Mureck. It is a cross between a campervan aire and a campsite. The owners have a quirky sense of humour, evident in the website, posters around the site, that we are stopping in pitch number 37, Ossy Kolmann Platz and the guy on reception gave Wendy an imitation pot plant “for your camper”. Even better, it is only a four minutes walk to the Hofer, which we now know is Austrian for Aldi. Here we topped up our supplies (Austrian wine) and I bought Wendy a little present, two solar lights to grace our campsites from here on in – look out for them in the photos later on the trip.

On the way back from Aldi – No it is not a volcano, it is a raincloud! 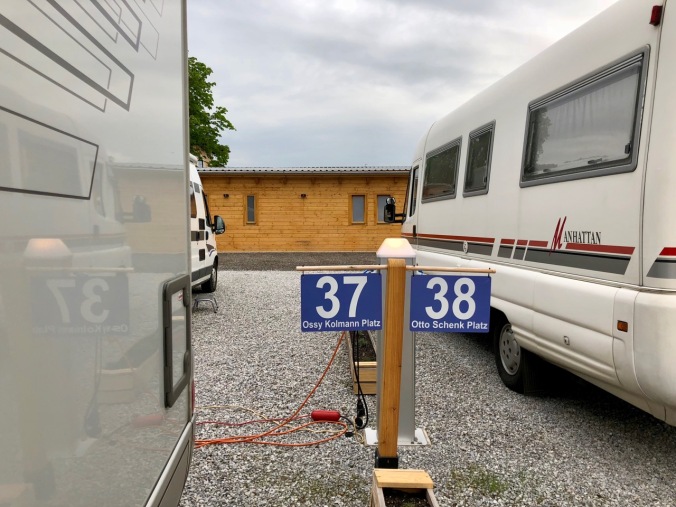 The only downside is that the site is in a dip, which means that there is only a 2G signal, but there is 3G up by the hundgarten or dog walk. This means that I cannot up load the blog or check out who Ossy Kolman is.

This is one for the camper van buffs!

By the way it was still raining by the time we finished the bottle of Austrian white and put the lights out!

One thought on “From Switzerland to Salzburg”