If you have had the enthusiasm to read yesterday’s instalment yet, you will know that this week Wendy and I have become wrapped up in a search for ‘authentic’ Croatia. Well (spoiler alert!) today we found it.

Our early morning walk (before it got too hot for Alf) took us up the hill behind Tisno and gave us great views over the peninsula towards the island of Murter one way and back to the mainland the other way. Tisno ticks the ‘authenticity’ box, but the campsite is a little ‘unloved’ and too far out; so before breakfast we were off in search of the campsite I had found the evening before by deciphering Andy Foskett’s memories of a sailing trip in the area he shared with me after a bottle of wine before we left the UK. 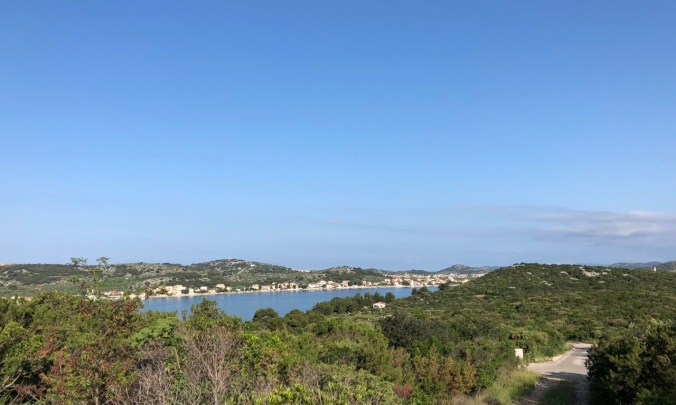 Not quite Allestree Park?

As we drove through the village on our approach to the campsite we knew we had found ‘authenticity’! Even though the old fishing port was now dwarfed by a large marina, there was still plenty of character and original buildings had been re-purposed, rather than replaced. The small campsite was at the end of the harbour, in an olive grove that had once been the very large back garden of the owner’s family home. She gave us a lovely greeting and implored us to choose any vacant pitch we liked. We pulled up next to a large, German-plated Hymer B674 with an equally large box trailer on the back. We exchanged a few pleasantries, but the chap was busy excavating two deep trenches to rest his back wheels in, to help with the levelling. Alf admired his digging skills and showed his appreciation by curling up on the spoil heap.

We walked into the village to buy bread for breakfast to find the shops in darkness. This wasn’t further evidence of ‘authenticity’ but a power cut caused by a digger going through the main electric cable to the street. No one seemed too surprised or bothered, just shrugging and saying;

“It will be fixed by eleven.”

We couldn’t even get a coffee!

Wendy knocked up a splendid breakfast from the last of our eggs and yesterday’s bread rolls. I settled down to catch up with the ‘blog (and listen to the test match) while Wendy was off to the beach. Alf was comfortable back watching the exertions of our German neighbour and admiring his technique with a mattock. More of which later.

After lunch there was plenty of pottering to be done. Some time I will have to explain what pottering can entail and how it easily expands to fit the time available.

Wendy managed to persuade me to join her for a swim. Despite a generous application of gravel, the beach was still rocky and sharp underfoot (the lack of waves in the sheltered waters of the bay means that there is no erosion to create sand or even pebbles) and the water was freezing. I don’t care what the thermometer might have said or Wendy’s, plainly biased, opinion – it was cold enough for my legs to go numb as I stumbled from one painful footstep to another. Convinced I was going to die of ‘cold water shock’ I did manage to swim for ten minutes or so and the water was delightfully clear and shimmered in the late afternoon sunshine.

The campsite has its own access to the beach and as we strolled back a magnificent sight unveiled itself to us. All day our German neighbour had been toiling away under the hot sun. After ensuring his van was perfectly level, he installed bottle jacks under the front axle and then returned to the excavations to drop the rear steadies to prevent any rocking. Next he unfurled his awning and attached additional sunscreens to the front and one side. After decanting his pristine Vespa scooter (picture below, Martin) I helped him manoeuvre his box trailer against the other side of the awning – despite the scooter coming out it was clear the trailer was still rammed full of stuff. The rest of the day we could hear banging and drilling that sometimes distracted me from listening to the test match. Now we could see the fruits of his labour.

He had erected a custom made frame tent that slotted into the side of the trailer and in the tent he had created a kitchen; complete with two fridges, induction hobs, wood laminate effect floor, cupboards, oven, all the utensils a chef could need and a clock. All of the units were perfectly level (as he showed me with his metre long spirit level). This was the camp kitchen to beat all camp kitchens. 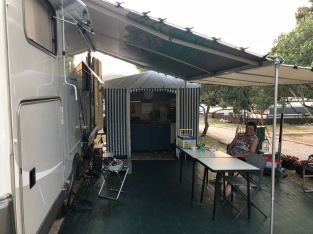 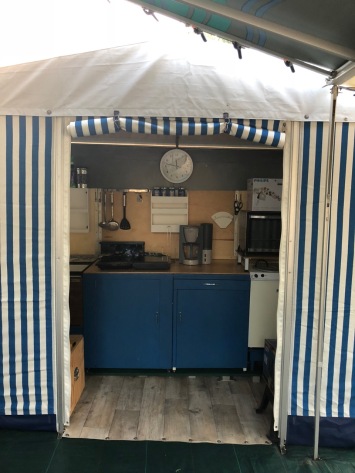 It turns out that he used to be a VW car engineer and he and his wife had been touring for many years, including a tour of Siberia! They had discovered this campsite some years ago and had returned ever since. They were staying for eight weeks and in that time were going to be joined by friends and family at different times. He had made the kitchen over the winter, five years before and used it ever since, lovingly erecting it and dismantling it each time. He is 79 years old! 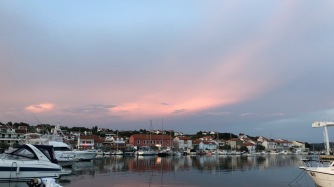 Over tea we decided to stay a second night. This is just the sort of site we have been looking for, I can see why someone would want to spend 8 weeks here, who knows perhaps one year we will?