Today’s post has been made possible by the sponsorship of Holly Jones.

Thirty days into our Australia Trip it rained, and did it rain? On Wednesday it came down in stair rods, great big drops falling from a dark leaden sky.

Monday and Tuesday had been gorgeous, a continuation of the blistering weather we had spent at the Games;

“it’s not usually this warm at this time of year.” Everyone we spoke to had told us.

Monday was a day of R&R (rest and relaxation Mum). Wendy and Katy went to Moffat Beach and in the evening we watched the sunset over Brisbane from Mount Coot-Tha. On Tuesday Wendy and I were back on the road, back in the van, heading north up the Bruce Highway bound for Australia Zoo.

Australia Zoo is world famous. It was made famous by Steve Irwin, the ‘Crocodile Hunter’ in the eponymously named 1990s TV series and who was tragically killed by a stingray off the Great Barrier Reef in 2006. His family have continued to run the zoo and it is clearly going from strength to strength. Holly has given us tickets to the zoo as Christmas presents and we were finally going to be able to use them.

The zoo specialises in Australian animas and must be one of the best in the world; it is well laid out, the animals have plenty of space, there is a strong emphasis on research, education and conservation as well as entertainment. A highlight of the visit was the display in the 5,500 seater ‘Crocoseum’, an amphitheatre at the heart of the zoo, which showcased some of the birds, snakes and crocodiles. This was a very slick performance but not as informative as the Hartley’s demonstrations in Cairns. There were plenty of keepers on hand as we toured the zoo who were keen to spend time talking about the animals and answering questions. It probably says a lot about me that despite there being loads of koalas, kangaroos around the place it was the water dragons, ibis and kookaburras that snuck into the zoo for an easy meal that I found the most fascinating. 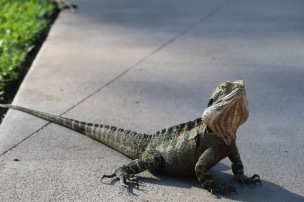 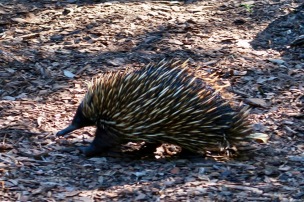 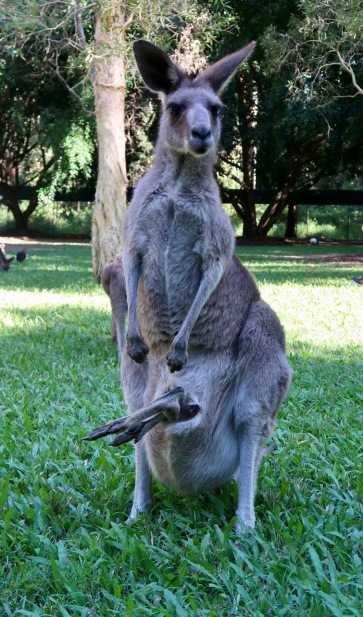 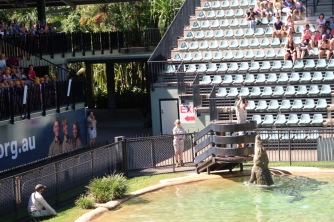 Our campsite was only three kilometres away in Landsborough and what a delight it was too. In the middle of lush woodland and around a couple of large ponds, it had two camp kitchens, one indoors and the other outside. There were chickens, waterfowl and a dozen or so bee hives.

We were parked up next to a Dutch couple, Andre and Nelly who were in the middle of a three-month tour of New Zealand and Australia. They were in a hired camper van, one that had been converted out of a Toyota Previa. It was a pretty tight squeeze for them, but it had an ingenious awning that fitted over the boot lid.

They were a very entertaining couple who had recently retired, following medical careers that had taken them all over the world, especially working in third world countries. We spent the evening chatting over a few beers and wines; at least this time we had supplies of our own to contribute, unlike our evening in Burrum.

Wednesday morning greeted us with the first dark, foreboding skies that we had seen since leaving the UK. We didn’t need connectivity to tell us that there was rain on the way. We breakfasted under the shelter of the camp kitchen and I got into conversation with a couple of brother-in-laws who were the proud owners of excellent examples of Australian off-road camper trailers. They were more than happy to show me their finer points so how could I refuse? Camper trailers are a cross between a trailer tent (one that unfolds from a trailer) and a caravan. They look like squat caravans but have clever systems for raising the roof to provide greater headroom. They are designed for jaunts into the outback, to be towed behind heavy-duty 4×4 vehicles on gravel tracks and indeed even where no one has bothered to make a track. One of the trailers was brand new and had just been picked up from the manufacturers nearby. The build quality was extremely good, made out of panels of a thick aluminium foam sandwich. It had a fridge/freezer, hob and sink that slid out of the side of the trailer, an internal toilet and shower. They were also equipped with sophisticated three-dimensional towing hitches and electronic fail-safe breaking systems.

My caravan curiosity sated we drove to Eumundi with the clouds looking darker than ever. Half way along the highway, they burst. The rain was biblical, all the traffic slowed to around 40km/h (about 25mph Gran) and even on fast, the wipers were struggling to win the battle to keep the windscreen clear. It stopped as quickly as it had begun – they don’t seem to go in for half measures over here. Ten minutes later we were greeted at the car park by a cheery woman who told us this was the first dry day they had had in five weeks, we didn’t want to disillusion her.

Our reason for visiting Eumundi was to visit the Eumundi Markets that many people had recommended to us and you know what Wendy is like for a bit of recreational shopping? Eumundi is a bit like the village of Kuranda we visited in northern Queensland; it has a strong ‘hippy chic’ vibe and the market has become a magnet for local artists and makers who sell their wares direct to the public. This was clearly very popular and the village was very busy. There were over a hundred stalls as well as street food vendors and buskers under the shade of avenues of majestic trees, all enjoying their first dry Wednesday in over a month. It didn’t take long for the curse of the Jones’ to catch up with us. The clouds we had managed to shake off on the Bruce Highway had regrouped and tracked us down. They hit with the same force they had used earlier. Eumundi Markets were now wet for six weeks in a row. After a brief spell of sheltering under a jewellers gazebo we dashed to a café for elevenses. When it arrived, the banana loaf was astounding, both in taste and quantity, served with a side portion of mascarpone cheese and local honey. Let it rain, I was going to be here some time. 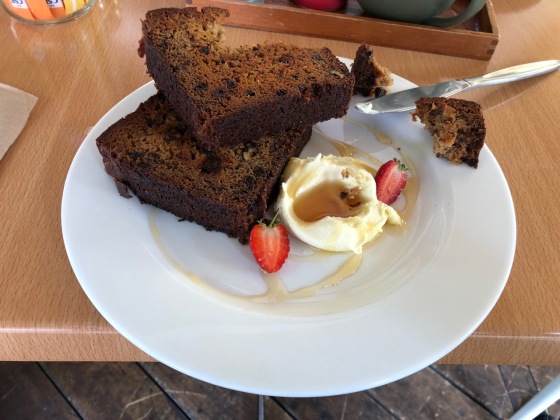 When the rain finally switched off we continued our mooching. I am proud to relate that I achieved a new personal best of four hours shopping without a complaint, not even a slight exasperated sigh! My equanimity continued even in the face of the disappointment of missing the final tour of the day of the Eumundi Brewery. I consoled myself by getting lost in a second-hand bookshop. This was a top specimen of the genre with shelves and shelves of books filling a large old building on the centre of the main street. Lots of the townships we have visited in Australia have second hand bookshops, but this was the first I had had the chance to explore. They are quite an institution down under, stemming from the days when new books were very expensive because of the transport costs. They are still very popular, often selling coffee and full of comfy chairs so you can just sit and read. In Maleny, the following day there were even a couple of middle-aged women completing some adult colouring books (by adult I mean, not children’s, rather than anything a bit ‘steamy’). I left with a bag full of purchases, wondering if my Singapore Airlines weight allowance will stand it. 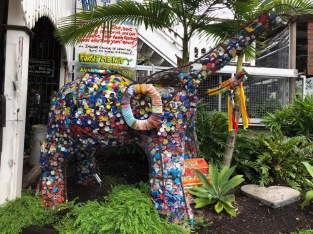 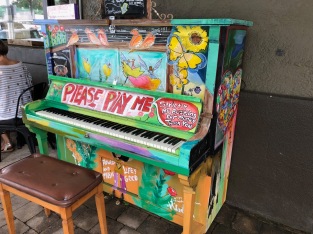 As we left the town the clouds, which had been temporarily resting, woke up and followed us, keeping us damp with their generous donations from their ample supplies. We pulled into Mapleton Falls to explore the national reserve and marvel at the views but, thanks to the rain, the views were missing in action. 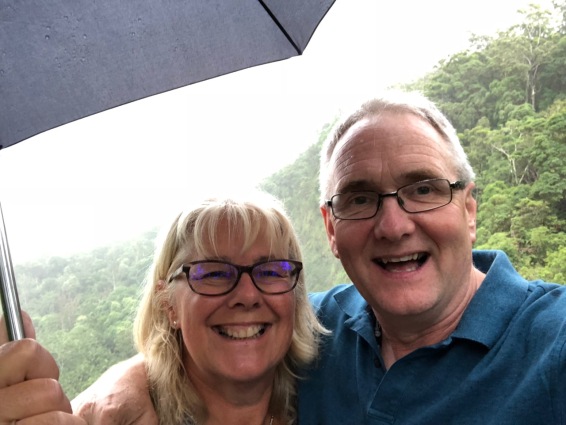 The Falls are behind us somewhere!

That night we enjoyed a convivial evening at the Landsborough Hotel with Andrej and Nelly, especially as it was ‘two for one’ night in the restaurant.

By the way; when Wendy and I arrived at the restaurant first it was full (I am not surprised it is popular given the quality of the meals and the ‘two for one’ deal). As we turned to leave, a family at a table saw our predicament and said that they would be finished in fifteen minutes and if we waited in the bar they would come and get us. This is a typical example of the instinctive kindness we have been shown everywhere we have been in Australia.

The estimable Landsborough Hotel also had plenty of Wi-Fi so we were able to have a closer look at the weather forecast, which wasn’t optimistic – thunder, lightning and rain for the next five days. We decided that we would have one more day on the road and then head back to Brisbane.

Thursday morning found us in the hill town of Maleny perched high on a volcanic plateau. Once a centre of the logging industry that has robbed this area of original rainforest, it has now become a very new-age town, chock full of tarot card readers, psychic counsellors, crystal sellers, access consciousness facilitators, regression therapists, hypnotherapists, energy healers, reconnective healers, and physiospectors! At the same time, despite only having a population of 3,500, there are a score of cafés all within an organic sugar cube’s throw of each other. It also has some very fine bookshops. We spent an enjoyable morning exploring the shops and art galleries, dined on organic, spicy beans and drove into the Glass House Mountains. 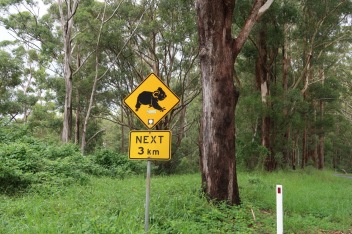 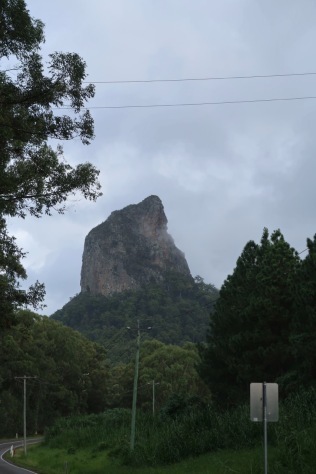 The Glass House Mountains were so named by Captain Cook on his discovery of Australia in 1770 because, from the Coral Sea, their shape reminded him of the glass kilns of his native Yorkshire. They are, as we learned on the Sunshine Coast, Laccoliths. Formed 26 million years ago by magma cooling under a long eroded plateau. Even though these weird looking landforms are incredibly old it is worth considering that if the 4.5 billion years that our planet has been in existence is compared to a 24-hour day, these hills were formed at eight minutes to midnight, i.e. 23:52! It makes you think doesn’t it?

Our cumulonimbus chums from yesterday came back for a visit which spoilt the chance for a stroll and so it was back to Brisbane; it is strange and a little sad to think that our adventures in 328 IBV, our trusty T4, are over – but perhaps only for the time being?